With the fanfare surrounding the USA’s victory in the 2019 Women’s World Cup, women’s football has been attracting more exposure and public interest than ever before.

Between winning the tournament, and co-captain Megan Rapinoe winning both Golden Boot and Golden Ball (awards for top scorer and best player, respectively), the American squad’s exemplary performance has been lauded as a perfect example of why women’s divisions deserve just as much respect as the men’s. Although investments in the women’s game have seen consistent returns – the 2015 and 2019 World Cups set multiple viewership records within the United States and around the world – sports videogames have been slow on the uptake.

FIFA 20 will be the first instalment to include playable women’s clubs after national teams were introduced in FIFA 16, the only major franchise to do either. Despite the global coverage, Konami, the developer and publisher of Pro Evolution Soccer, and Sports Interactive, maker of Football Manager, have both stated that including female players isn’t a priority – at least, not for the near future. Sports Interactive has included women’s football club staff, including the historic addition of Chelsea manager Emma Hayes in Football Manager 19, but claims the time and research needed to add female players wouldn’t be financially viable. The outlook is bleak, but not completely desolate, thanks to the efforts of one dedicated modder.

Stuart ‘FM Guru’ Robertson has created databases of women’s football for the last several iterations of Football Manager (see his Steam Workshop here). Started as an exercise to help him become more familiar with female players and clubs, the mod has become a large, ongoing project that caters to a woefully underserved market. The mod includes the top English and Scottish divisions and every US team, with the German league and more coming next year. The built-in editor makes team creation relatively painless, but because the game’s framework is only made for men’s play, everything needs to be written from scratch upon each new release.

“Starting the women’s database involves deleting over 200,000 people,” Robertson tells me. “Clubs, countries, and competitions need to have their history removed and reputations altered to mimic their actual standings in women’s football, so the number of database changes is huge before I’ve even created a player.” 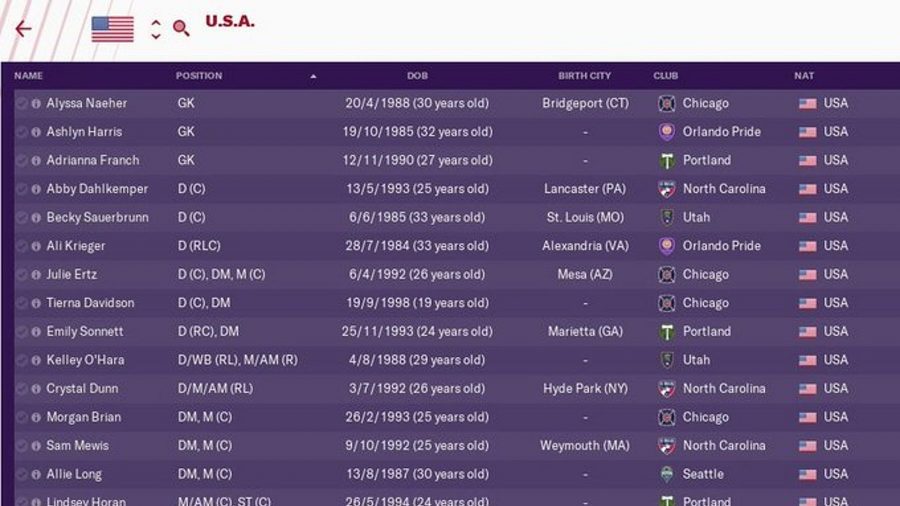 Most features can be replaced in this manner, allowing for a very convincing simulacrum of a Women’s Football Manager – except, that is, for the unalterable and unfortunate name-generators that spawn youth players called ‘Alan Taylor’ and the like. All these alterations mean the file sizes of the mods can be substantial, leading to some in-game slowdown. Thankfully this is the only issue Robertson’s encountered in his tinkering with the databases so far.

A special legends pack takes ten of the all-time greatest women’s footballers out of retirement and inserts them into the game as free agents, allowing players to try and purchase them and make history all over again.

As mentioned, there will be four complete country tables in the next version, with almost all of Europe’s top clubs being added to keep the Champions’ League interesting. Being a single creator, Robertson has had to find the statistics for anyone he wants to include and then do the requisite balancing himself. Each team is added one at a time to ensure their entry is as thorough as possible and their performance is appropriately recreated. Contrary to how it might sound, the biggest difficulty is less in programming the in-game numbers and more in finding reliable sources of information. 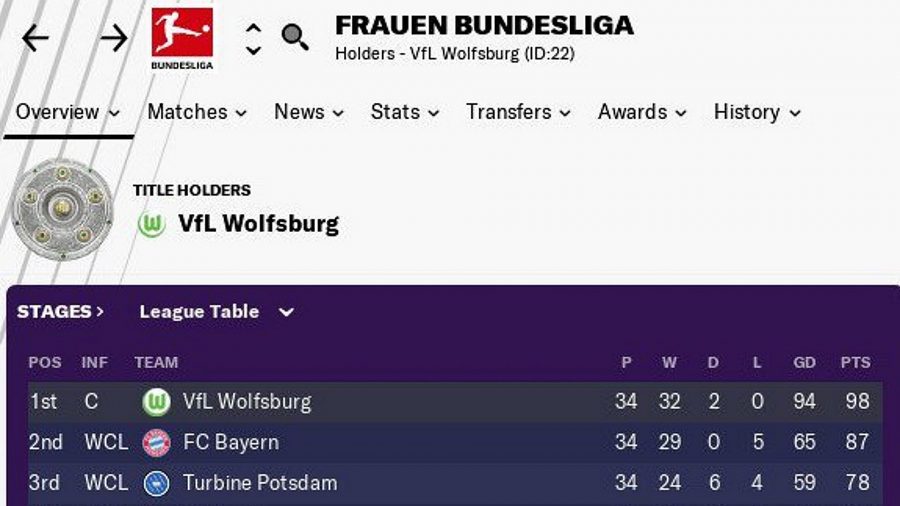 “It varies between clubs, but almost every club website has much less information on their women’s team compared to their men’s,” Robertson says. “There are thousands of sites with football news and player info for men’s football but far fewer dedicated to women’s football, and most of them aren’t in English.” For some teams, he had to cut out the middle-man and contact them directly for specific, relevant figures. The organisations were all happy to help, of course, but it shouldn’t be such a slog when we’re talking about professional players of the most popular sport in the world.

Having to go to such lengths has made Robertson sympathetic to the reluctance of those game developers. Sports Interactive would need to do considerably more legwork to get the same data it uses for its male players, and if it’s going to do so, it may be better off building a second game to support it all. 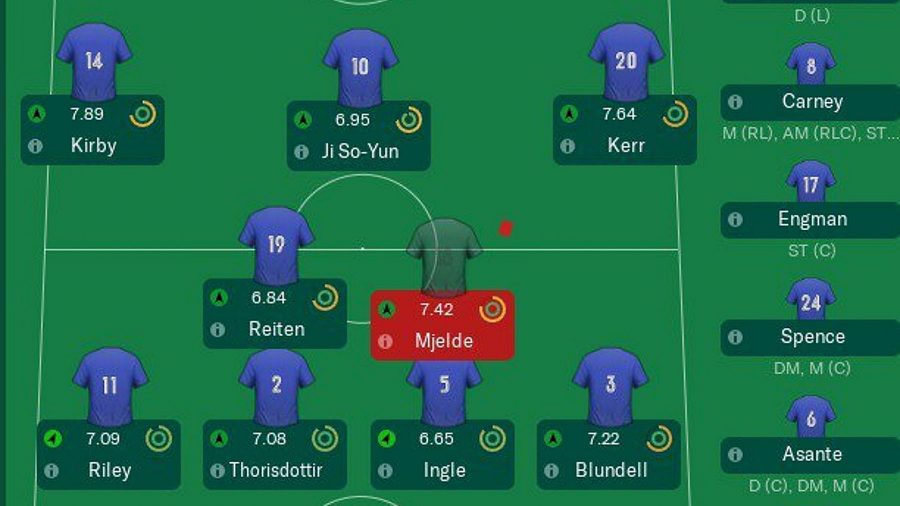 The reason EA has jumped ahead of the curve with FIFA where Sports Interactive hasn’t is probably as simple as just not needing to. “EA has since added the WNBA to its basketball game too, so it is more than happy to lead the way in offering fans the chance to play as women’s teams,” Robertson says. “It offers something different than its competitors and that can only help sales. I think the lack of a competitor is a factor in why Football Manager hasn’t followed suit yet.”

Some are trying to fill the void – Trophy Games released the well-reviewed Women’s Soccer Manager on PC and mobile in 2017 – but Football Manager is so well known that it’ll take some serious publishing muscle to encroach on its market share. At least the community has FMGuru while we wait for the game industry to recognise women’s football, like the rest of the world is starting to.