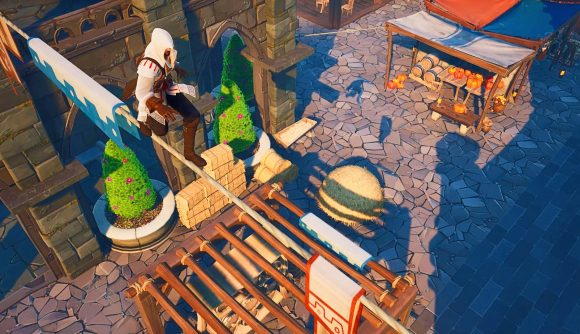 A Fortnite fan has put together an Assassin’s Creed-themed map for all your parkour, practise, and roleplaying needs. It’s still in the works, but there’s already a Fortnite map code you can use to give it a whirl.

Redditor Ryu-Gi has shared what they have so far on the battle royale’s subreddit, showcasing 18 screenshots to give everyone a sense of the map’s vibe. It is, unsurprisingly, very much an Assassin’s Creed map. A quick look through the screenshots reveals an impressive cathedral, a tightrope above a market, and plenty of cobblestone streets to run around.

With Assassin’s Creed being a varied series, it’s clear that the map creator is going for the classic look here. They’ve been waiting for the Ezio skin specifically to be able to show this map off, because they wanted to make sure they could have good screenshots and create a trailer. They’ve also said we can “expect it to drop very soon!”

You can play it now in early access by using the map code 7374-2742-7848. We’ve messed around in it for a little bit, and there are some very clever details in there, like using Thermal Fish to replicate Eagle Vision and adding a bush to let players sneak around. There’s definitely a lot of potential in this map for game modes like capture the flag or hide and seek. Do keep in mind that, at the time of writing, the map isn’t complete yet, so things might change.

Fortnite has already seen a small infusion of Assassin’s Creed this week thanks to the new Ezio and Eivor skins. If you’re hoping for more crossovers, then you’ll probably be happy to learn that a Star Wars-themed one could be on the way.

Looking for more of the best Fortnite island codes? All you have to do is follow that link.