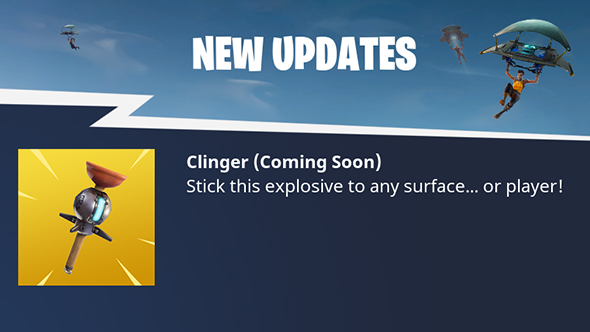 If you’ve loaded up Fortnite today, you might’ve caught a glimpse of a new weapon set to hit the game soon. The Clinger is a new sticky grenade that can be attached to a player or surface, providing explosive damage once it’s stuck. It also sticks via use of a plunger, which is fun.

Find out how to beat the Fortnite week 10 challenges.

The Clinger has only shown up as part of the in-game news feed, so we don’t have much more detail than that. Around the time that message appeared, however, Epic suspiciously tweeted that Fortnite v3.6 “will be sticking its landing” tomorrow. Get it? “Sticking.” Like a sticky grenade.

We’re still waiting to find out what the deal with that comet is too, but as of the moment it’s starting to look like an elaborate April Fools prank. Unless that’s actually what the “landing” Epic mentioned is about. At this point, rather than speculating even more, you should probably just wait for the update.