Epic Games is is experimenting with an innovative method to get Fortnite players to use smoke grenades: make them smell bad. Yes, it appears stink bombs are coming to Fortnite, replacing the smoke grenade that was retired to the Vault in March.

The first whiff of the stink bomb came with the latest round of datamining, and was confirmed today when the item briefly appeared in the Fortnite in-game news feed. A quick-thinking redditor was able to snap a screengrab and post it to the game’s sub.

The Stink Bomb is a grenade-shaped item, and its description reads, “Explodes into a cloud on impact and slowly damage [sic] anyone inside.”

There are plenty to choose from, but which battle royale is the best?

The Stink Bomb has a few interesting possibilities. The cloud it emits could be used to block line of sight, of course, but that was exactly what the smoke grenade did, and it was rarely ever used. Instead, it seems like the Stink Bomb will be more useful as a way to flush out opponents hiding behind obstacles and in small forts, or to push players out of a room or area you want to be sure is clear.

How useful it is will of course depend on how long the area of effect lasts, how big it is, and how much damage it actually does. For it to function like a real stink bomb, it’ll need to provide a powerful incentive to leave the area, quickly – and for that, it’ll have to do an appreciable amount of damage. 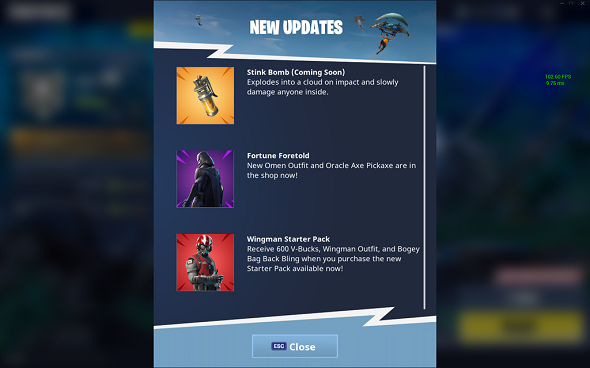 As Forbes’s Dave Thier notes, the Stink Bomb will only be the second Fortnite grenade that actually does damage at all, with the other being the standard-issue fragmentation grenade.

In any case, we’ll have a chance to gas out our friends (and enemies, I suppose) before too long – the Stink Bomb will probably arrive in-game by Thursday at the latest.