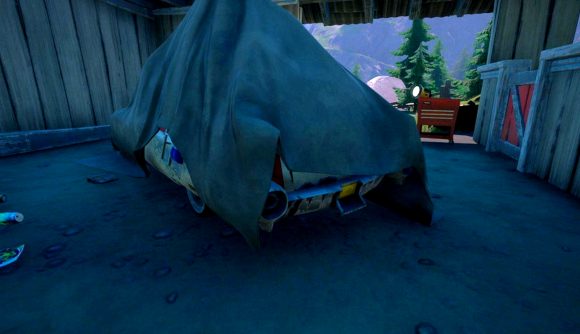 Fortnite is already in the Halloween spirit with the start of Fortnitemares 2020, but it looks like more is coming – specifically, a big ol’ Ghostbusters crossover. Dataminers uncovered the details of some new Ghostbusters cosmetics and achievements after the 14.40 update, and Ecto-1 has even appeared in a new in-game easter egg.

Three new Ghostbusters-themed bundles were added in the 14.40 files, as FireMonkey notes on Twitter (via Fortnite Intel): Ghostbusters Gear, Ghostbusters Crew, and Ghostbusters Patrol. On top of that, HypeX uncovered a new achievement called ‘I Collect Spores, Molds, and Fungus’ – besides the title being a Ghostbusters quote, the challenge asks you to gather a foraged item while wearing a Ghostbusters outfit.

On top of that, if you head to Camp Cod, you’ll find a car underneath a tarp – clearly the Ghostbusters’ own Ecto-1. The image above – via lem09n11 on Reddit – is perhaps the clearest indication that the film crossover is happening, and it’s probably happening very soon.

How soon? Well, Ghostbusters: The Video Game Remastered will be free from the Epic Store on October 29, so it’s likely the giveaway is just part of the co-branded promotion.

Name: I Collect Spores, Molds, and Fungus
Desc: Gathered a Foraged item while wearing a Ghostbusters outfit during Season 4.

Trying to find the Fortnite Shadow Midas location? Or maybe the Fortnite Witch Shacks locations? You can naturally follow those links for some help through Fortnitemares 2020.