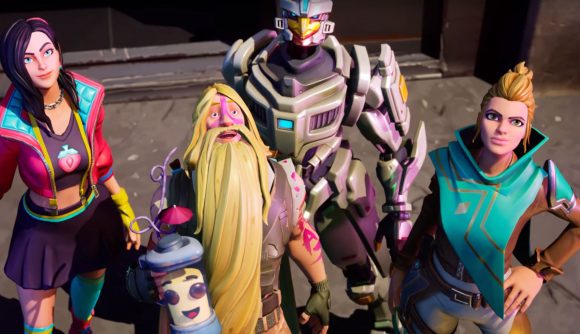 As if the recent John Wick-Fortnite crossover wasn’t news enough, the battle royale extraordinaire is now to host legendary basketball player Michael Jordan. Epic Games’ patch notes reveal that the number 23 himself will tie into in Fortnite’s most recent update – but this time in the Fortnite Creative mode.

According to the patch notes, the Fortnite Creative crossover will let you “show off your moves in the New York City inspired, Downtown Drop LTM by Jordan featuring Creative artists NotNellaf & Tollmolia”. The scene the two creators mentioned have crafted looks a little more suited to some skateboardy shenanigans rather than much actual basketball, but it looks pretty neat all the same.

It doesn’t look like you’ll be able to buy a Michael Jordan skin as you can for the John Wick tie-in but there are some themed outfits and accessories to grab instead. The “Hang Time” set includes the Clutch and Grind outfits, plus a challenge pack of goodies unique to the bundle.

Check out the trailer on the Fortnite news Twitter page showing some of the kit in action:

Note the lone goat emoji, probably standing for “greatest of all time” – a fitting nod to the star’s sporty supremacy.

Also look out for the update’s other Creative additions, such as the Haunted Hills theme, packed with all you need for your “creepy creations”, plus a new “fastest time to win” setting that includes some new options for setting up your gameplay.