You may be looking at the week six Fortnite challenge list and wondering just what you need to do to complete the Signal the Coral Buddies challenge. The coral buddies have been part of this season’s challenges before, and they’re the adorable little blob creatures that populate the Coral Castle area to the northwest of the map.

However, this task doesn’t revolve around finding them, and it also isn’t done by playing some musical notes from a very specific point in the map. No, you’ll need to open some clams to signal the coral buddies. This is easier said than done, since everyone in the area will likely be trying to find the same three clams!

As always, it’s easier to complete this challenge in a mode such as Team Rumble than the regular battle royale, so make sure you have the right game mode selected before attempting this challenge. This guide to the Fortnite Signal the Coral Buddies challenge will show you exactly where the coral conches are that you need to play, and also provide any further information as it comes to light.

How to Signal the Coral Buddies

To signal the coral buddies, that you need to head to Coral Castle in the northwest corner of the map. An earlier version of this guide directed you to some coral conches to the north of the main part of Coral Castle. This was a bit of a decoy as it turns out. The real targets are three big ol’ clams that are all hidden on land. Simply open all three clams to signal the coral biddies. Cheers to YouTuber Perfect Score for uncovering all three locations. 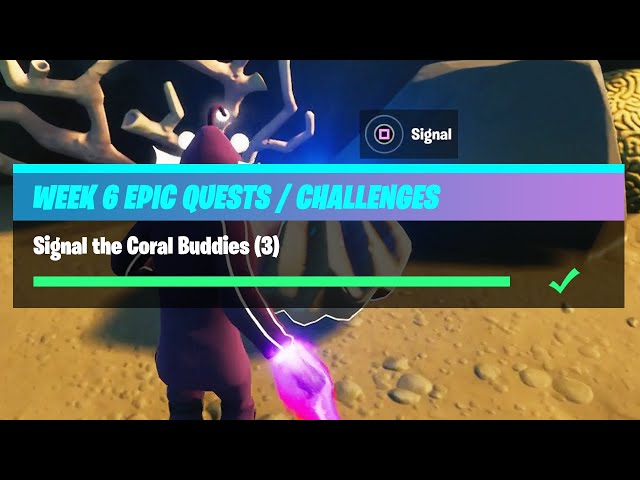 The locations for all three clams are:

And really, that is all you need to do to complete the Signal the Coral Buddies challenge in Fortnite. It may take a couple of attempts, particularly if everyone’s opened the clams up or if enemy players are using the location as an impromptu ambush, but it’s otherwise quite a simple challenge. Since you’re in Coral Castle, you should also look into completing some of the other tasks for this week as they’re all a bit nautical themed. There is also an NPC wandering around that can upgrade your equipment for gold bars: the easiest way to get those is by taking on one of the Fortnite bounty missions, looting chests, or eliminating opponents.