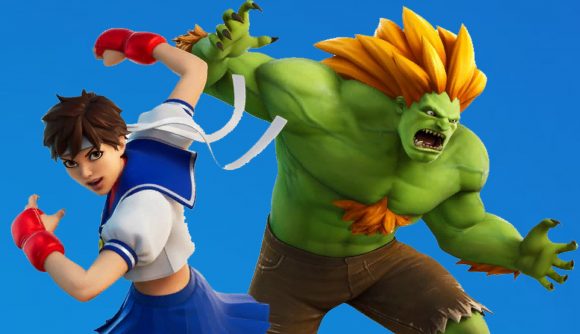 Epic confirms that the latest Fortnite Street Fighter skins to arrive in the popular battle royale game are Blanka and Sakura, following on from last year’s release of Ryu, Chun-Li, Guile, and family-friendly Cammy. Yes, that means Fortnite is getting a muscle-bound green monster in ripped shorts and it ain’t Marvel’s Incredible Hulk.

The latest Fortnite collaboration coming to the multiplayer game is the next part in its Street Fighter series, with Blanka and Sakura skins and accessories getting a release later this week, on April 28. Blanka comes with a backflip emote, a big kebab pickaxe, a chibi version of himself as a backpack, and a natty suit version inspired by a character from fellow Capcom fighting game Rival Schools.

Sakura, on the other hand, comes with the “Victory Sway” emote, Hanakaze claw arcade machine backpack, the slightly weird Kayari Buta glider, and a giant stone fist pickaxe. Much like with Cammy and Guile, there will actually be a special Street Fighter competitive event in the form of the Battle Royale Duos cup.

The cup will also kick off on April 28, but it’s not quite as exciting as previous events as players will not be able to win either Blanka or Sakura skins. Instead, the top-performing players will earn the special Bonus Stage loading screen, which you can see below.

Taking a break from the crane game, @StreetFighter's World Warriors Blanka and Sakura are coming to fight.

Read about their two Tournaments that are happening, including a mobile-only Tournament!

It is interesting that despite Chapter 3 Season 2 leaning so heavily on Marvel crossovers, the Incredible Hulk still isn’t in the game. You can earn a minor Spider-Man villain right now, at least.