I’ve always longed to write a review which warranted that indulgent opening. Forza Motorsport 7’s arrival offers the best chance I am ever going to get so you are damn right I am taking it. Not simply because – yawn – it is a game with good and bad aspects, but because in some real and very tangible ways, this is the best time there has ever been for PC racing game fans. One year after the exquisite Forza Horizon 3’s release and less than a month after Project Cars 2, Turn 10 offer us the closest thing to Gran Turismo on PC that we are likely to ever get.

If you’re a petrol head then check out the best racing games on PC.

Remember 2013? When Need For Speed went off the rails, and we barely had Grid 2 and a lacklustre F1 2013 to rub together? That was only four years ago. The genre’s in a definite upturn.And yet, to look at the same sequence of events with a different eye, this is a dark time to have an interest in gaming at all. Loot boxes are becoming as ubiquitous as they are divisive, and so, naturally, there are plenty of them waiting for you within Forza Motorsport 7’s menus. Expensive ‘collector’s’ editions are taking root too, which as an aspect of the Forza series that has already proved fertile soil for Microsoft, who offered an £80 Ultimate Edition of Horizon 3 which didn’t include a season pass. They have followed suit with that pricing model in Motorsport 7. Of course they have. 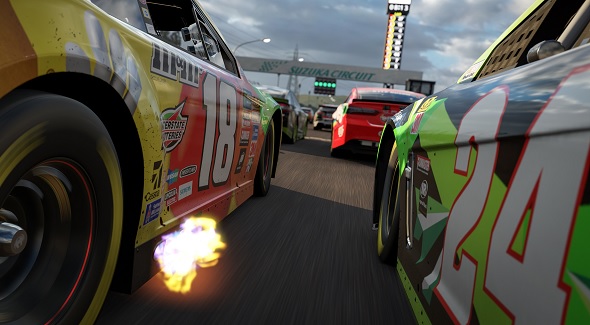 What’s more, the VIP pass, which earned 2x credits permanently in Horizon 3, now does so for only 25 races in this game. Turn 10 and Microsoft weren’t the progenitors of these hot button issues, but they nevertheless find themselves releasing a deeply topical game at a time when the buttons in question are practically incandescent. So do you want a review of the game, or of the industry?

That was a rhetorical question, of course: I’m going to talk about the game. If Project Cars 2 is about kicking your ass and making you cry until you finally learn to drive properly with a racing wheel and all the assists off, Forza Motorsport 7 aims to do the exact opposite. This is a racing game devoted to making you feel awesome with a pad in your hand (although wheels are, of course, supported and also rather enjoyable).

We used to refer to that concept as sim-cade in the olden days – games whose cars handle the way you want them to, rather than a supposed 1:1 simulation of their behaviour which is, for some reason, punishingly unmanageable. It takes a tremendous amount of work and skill to achieve the former feeling, of driving a car on the limit using two triggers and a stick, and really believing in its behaviour, even though it is not making the same demands of you that, say, Assetto Corsa’s vehicles do. Forza Motorsport 7 gets this feeling right more than any driving game in recent memory. It is fun to drive from the default third-person cam with auto gears and a few assists on for that Need For Speed experience. It is also fun to turn them all off, restrict yourself to the cockpit, and explore the minutiae of each car’s handling in closer detail. Never does it become the kind of ultra-serious racing sim that pro drivers use as actual training aids – enjoyment in those sims is kept behind a wall of practice hours. Here, you’re having a lovely time from the first squeeze of the accelerator. 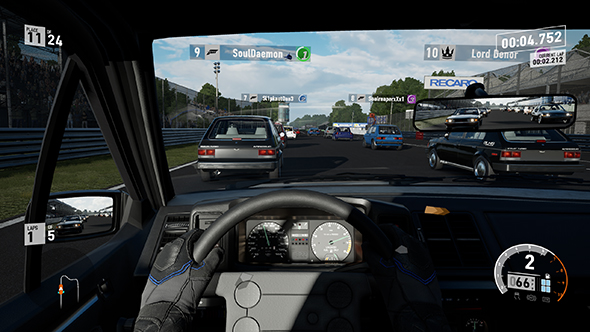 Structurally, it is a rich and refined manifestation of Forza’s raison d’être: to do the Gran Turismo thing on platforms beyond the PlayStation. As such, the key components of Motorsport 7’s single-player are its 700+ cars, and a series of tiered championships leading to one grand final, powered along by slick cutscenes and voiceovers from drivers and manufacturers. Peppered throughout the standard issue events are chances to do something more novel, like car bowling in a stretch limo at the Top Gear test track, overtaking dozens of VW Beetles in a Porsche 918 Spyder for a high score, or a faceoff with energy drink enthusiast Ken Block at Long Beach.

Some of the regular racing series offer the chance to approximate real championships too. Licensed NASCAR, IndyCar, Touring, GT, Endurance, F1 (old and new), and Formula E vehicles are packaged into easily digestible five or six-race events, giving you a chance to sample the discipline – but, sadly, not to truly immerse yourself in it. My NASCAR career, for example, consisted of three oval races and three circuits. After completing that it is on to the next shiny new thing. Perhaps driving vintage supercars through the streets of Prague while flocks of birds time their skyward dashes for optimum on-screen spectacle. Maybe an all-Porsche dash through Silverstone in a thunderstorm.

The visual drama of all your endeavours never fails to impress. Lighting and weather conditions change dynamically from lap to lap, although since most races don’t last long enough to require pitstops – and thus strategic tyre changes – those turns in the weather have more impact on aesthetics than gameplay. It is less about adjusting braking markers and more about listening to the sound of your wipers, admiring how convincingly the car in front is throwing up spray. 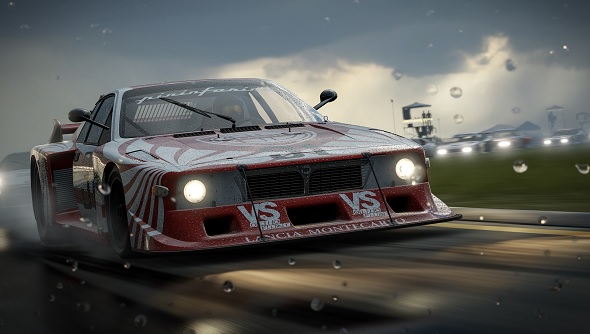 On a technical level, the game is… well, it’s odd. The visuals are fantastic, and at first it seems as though things are well-optimised for PC. On my i7 2600K and GTX 1070, Forza Motorsport 7 can handle max settings at frame rates in the low 50s, or a reasonably stable 60 with MSSA, shadow resolution, and particles turned down a touch. The game still wants to adjust all your graphics options dynamically to hit a target frame rate by default, but you can tell it not to. However, the engine’s own VSync seems to really struggle with frame pacing so, paradoxically, I found a much smoother experience in disabling any fps limiting or sync options. There is still plenty of noticeable stutter in menus and races, however, which seems to worsen over time. Puzzling.

The same goes for all the crashes and graphics bugs I have experienced. At the time of writing I am in the process of sending crash reports and talking through these issues with Microsoft, so I can’t say for certain whether the frequent CTDs I’m experiencing are specific to my system, or indicative of the game itself. I will be updating this review as the communications progress. What I can say about them, unreservedly, is that I find them very annoying. I have also raced around on thin air at the Rio and Nurburgring circuits while track textures flicker and ultimately disappear. Also annoying.

But, just like a humble reviewer relaunching the executable after such a crash, let’s get back to Forza’s content. True to the 20-year-old Gran Turismo blueprint, Forza Motorsport is a game about amassing wealth. Amassing wealth to buy cars and upgrade them so that you can win more races, in order to amass more wealth. To buy more cars. Long has that paradoxical formula held my interest, from the days of Blu-Tacking My PS2 pad’s X button down and leaving my Suzuki Escudo Pikes Peak to scrape the walls of Super Speedway for 177 laps and claim victory and copious credits in my absence. And I feel that same draw here, perusing this game’s many million-plus credit cars from the 700-strong roster. For a PC audience who never got to do the Polyphony experience on home soil before, this is a thrill. All it is lacking in this respect is the smooth-jazz soundtrack. 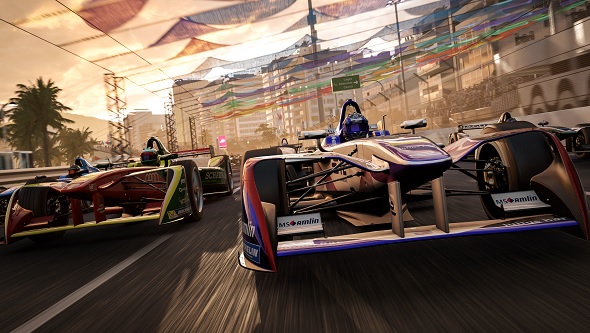 I am also spending more time in multiplayer than I thought I might. Forza’s approach is a double-edged sword, really: ‘come in and mess around online, it is fun!’ it seems to say. And you do have fun, in a much less punitive environment than Serious Racing Sims allow. And it is wonderful to pick a car you just bought and see how it fares against strangers and their horrible liveries. Wonderful until someone T-bones you into a corner and then wins the race. Then you wish it was more punitive. Currently, multiplayer is structured only by event types, without the tools to facilitate online racing leagues just yet. It is about proving yourself in a quick race and being ok with heavy contact throughout. Knowing that, I am drawn to it.

What I do not feel drawn to in the least are the loot boxes. Inside them are cars, driver outfits, badges, and mods, which you can apply to races in order to achieve more credits for performing specific feats. Already these unassuming boxes of tat find themselves at the centre of gaming’s latest controversy, with some claiming that the mods inside represent a ‘pay to earn’ mentality on the developers’ part. Halfway through the game’s extensive career and having opened a grand total of three loot boxes, I don’t feel hobbled by my unwillingness to participate in them. I don’t feel the sting of the many locked driver outfits (over 300, actually). And I don’t feel tempted to buy any more of them on the off-chance they contain a valuable car. If I want a car I will pay for it with credits. If I want credits I’ll win some races.

Hand on heart, I don’t care what my driver wears when he is inside a car, and that’s the only content that is kept behind a loot box wall. Unlike NBA 2K18’s microtransaction model, in which it feels that the actual experience of playing the game is being held to ransom, the loot boxes in Forza Motorsport 7 cannot, at present, be bought for actual cash, and in my experience do not impact the trajectory of your progress nearly enough to get hot and bothered about. 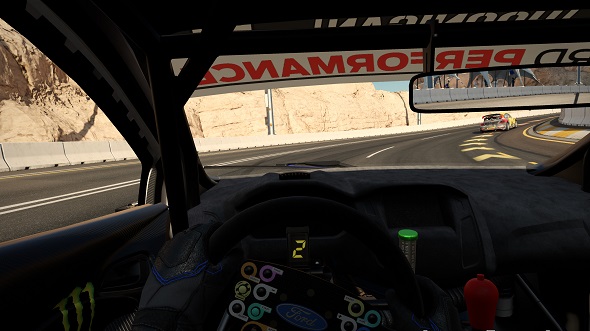 The about-turn on what a VIP pass gets you is far more concerning, however. The difference between Forza Horizon 3’s permanent 2x credits bonus and this game’s 25-race lifespan is striking, and hard to defend. Car prices have been tweaked significantly so that instead of pricing several cars in excess of 10 million Cr., as Forza Horizon 3 did, the most valuable vehicle (pre-Auction House, anyway) costs 1.5 million Cr. But there are still many, many cars in that price range, and there certainly doesn’t seem to be any danger of players finding themselves with an excess of credits and racing through the collection with too much ease. Why the VIP pass, which costs extra real-world money, would short-change players in this manner is beyond me.

Whoops. I suppose you can’t review the game without also reviewing the industry a little bit, eh? In Forza Motorsport 7’s case, that is a great shame. At its core is a rewarding driving model, hundreds of gorgeous and unusual cars, and some imaginatively designed solo championships to tackle in them. In time, it will probably be unreservedly brilliant. But, right now, I can’t overlook the technical problems that I’m having. And, to continue this candour, I can’t overlook the VIP pass nerfing or the exclusion of a season pass from Forza’s Ultimate Edition either.