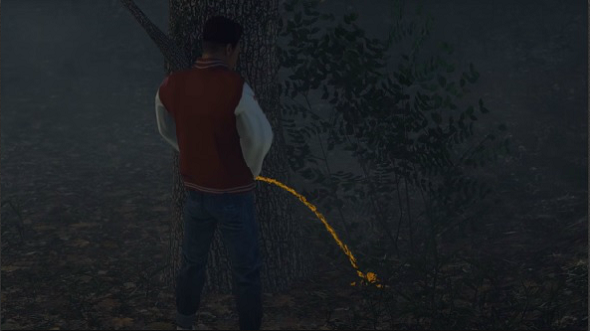 The developers of the campy horror stab-em-up Friday the 13th have published a video showing off some work-in-progress footage of the single-player features they have planned for the game. You can check it out above (be warned – this being a Friday the 13th game, there’s some rude language and gore).

Check out our list of the best horror games on PC.

The challenges will put players behind Jason’s grubby hockey mask and give them movie-themed murders to pull off. According to developers, they’ll also feature brand new voice acting, new maps, and unique “cinematic” kills.

In the video, two teenagers on their way to a party to meet “hot chicks” stop to fix the car and take a bathroom break. Jason, controlled by the player, stalks up behind the lad who’s had the effrontery to urinate on a perfectly innocent tree. What follows is, well, a rather pointed lesson in outdoor decorating.

Gun Media say the single player content will be free for everyone who owns the game, and will come out along with the game’s engine upgrade patch. No date has been set for that update yet, however.