WD set itself a pretty high bar with its original entry level NVMe SSD, as we considered the 500GB WD Blue SN500 the first horseman to SATA’s eventual apocalypse. But with the SATA connection already yesterday’s news and affordable NVMe drives slowly but surely becoming more commonplace, what exactly is the 1TB WD Blue SN550, aside from a slight change in product name that you’d easily miss at first glance?

The Blue SN550 is WD’s 2020 refresh to the acclaimed line, and while its predecessor is a tough act to follow, its updated controller and NAND flash package deliver better speeds and lower temperatures at its lowest price point yet – ideal for the best cheap gaming PCs out there.

But even with all the improvements under the hood, the greatest change is that it finally comes with a range of capacities to choose from, mirroring its performance-focused WD Black SN750 with the same 250GB, 500GB, 1TB, and even 2TB options. It’s the 1TB version we’re looking at today.

The 1TB WD Blue SN550 is rated up to 2,400MB/s, which is a mighty improvement over the 1,700MB/s read speed seen in WD’s first attempt. Its write speed also sees a substantial increase to 1,950MB/s from 1,450MB/s. Combined, these make for a fantastic rating at a largely uncontested price point, with its closest competitor, the Adata XPG SX6000, lagging behind in both speed and endurance.

These jumps in performance all come thanks to ditching the PCIe 3.0 x2 bandwidth that restricted the WD Blue SN500’s peak capacity to 500GB and hindered the sequential read and write speeds. Instead, the WD Blue SN550 has doubled its lanes using PCIe 3.0 x4 bandwidth.

Related: Read our hardware glossary for help with tech terms

WD has also doubled the amount of terabytes the drive can write during its lifetime, not only beating older Blue NVMe drives, but standing tall over the more expensive WD Black range. Sure, it doesn’t quite hit quadruple digits like the Addlink S70, but 600TBW should last you quite some time and there’s still the confident 5-year warranty backing you if something goes wrong.

Our benchmarks show that WD is quite realistic about the SN550’s rated sequential write performance, but the same can’t be said for read speeds, which fall between 100MB/s and 200MB/s short. It still runs circles around the WD Blue SN500, however, and manages to do what its predecessor couldn’t: beat the sequential write speeds of the 2018 WD Black PCIe drive.

This might not sound much of an achievement over two years later, but a budget Blue drive standing toe to toe with a premium Black drive shows just how far we’ve come. And the improvements don’t stop there, either, as it leaves the more recent WD Black SN750 in the rearview mirror in AS SSD 4k random tests, making it the ideal boot drive.

The WD Blue SN550 also has remarkable temperatures considering its leap in performance, shaving 5°C off its maximum for a relatively cool 59°C – the lowest we’ve seen at these speeds. Remember, the faster a drive is, the hotter it naturally runs, which is the same reason we we pop the best CPU coolers on our processors. The drop in temperature here is partly due to clever engineering, shifting the NAND flash package way over to the other side of the PCB. Since it’s no longer sitting next to the memory controller, the two have more room to breathe.

Note: There are other factors that contribute to the time it takes to load into a game, such as partner logos and health warnings flashing on screen, the synchronisation to the cloud, DLC checks, and connecting to online servers.

Synthetic benchmarks are a great way to broadly tell how a drive performs, but the scores aren’t representative of how they fare in the real world. For that, we’ll need to look at file transfers and boot times of the latest games.

The WD SN550 1TB is roughly 19% faster than the original, shaving a respectable 37 seconds off the time it takes to transfer a 30GB file on average. Better yet, it’s only five seconds slower than the WD Black SN750 1TB while being $35 / £26 cheaper at MSRP. It’s up to you how much value you want to place on the precious time you’d save, but the price-to-performance ratio is certainly strong with the new entry level SSD.

We’re seeing an increasing trend in developers recommending SSDs for the optimal experience, and for good reason. With the SN550, you could be exploring the busy world of Cyberpunk 2077 in 50 seconds, or selecting which game mode to play in Call of Duty: Black Ops Cold War within a minute. In less than a minute and a half you can be running around rural England in Assassin’s Creed Valhalla. It’s not instantaneous, but it’s pretty darn close for a drive at this price point. 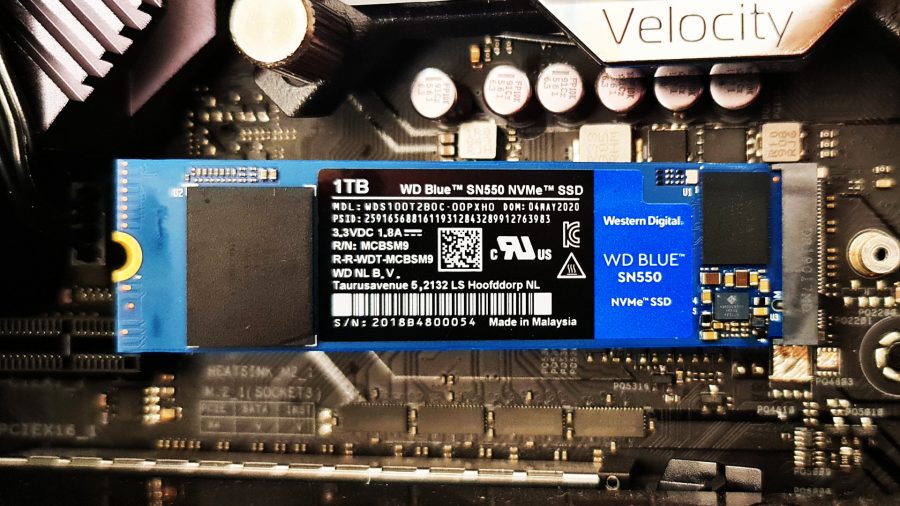 At just ten cents per gigabyte, the WD Blue SN550 1TB boasts the best value of its entire family and is an impressive budget M.2 SSD that provides a comfortable option for those unwilling to pay the extra for the premium WD Black model. Its original $129.99 price tag made it difficult to recommend since it exists in the same world as the $126.99 Addlink S70, but it regularly sits around $100, making it one of the most affordable SSDs of its caliber. Plus, like all M.2 drives, it’s compact enough to slot into the best mini PC, too.

Built-in M.2 slots are in short supply with motherboards often boasting one or two, so it’s worth thoroughly considering a faster drive before checking out – after all, it’s not as simple as relegating it to a secondary drive when upgrading again if you don’t have the space. But if you’re juggling where to allocate your funds for a new build or upgrading multiple parts, the WD Blue SN550 1TB has earned its place as our favourite budget drive on our list of best SSDs for gaming thanks to its balance of price, performance, capacity, and endurance.

A rare example of an NVMe SSD that isn't about sacrificing one feature for another, the SN550 boasts an unrivalled price-to-performance ratio.