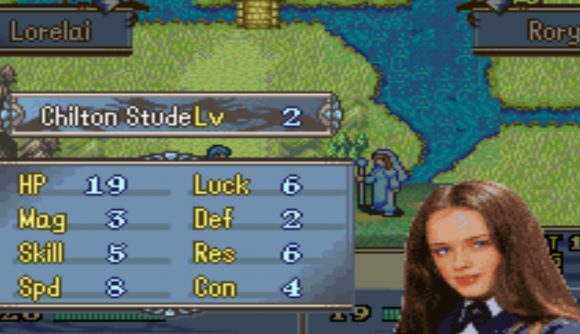 Gilmore Girls and Fire Emblem. One is an intense character drama that demands your full investment through an interconnected narrative web of love and loss, victory and defeat – and the other’s a great series of strategy-RPG games.

Developer Marlowe Dobbe has made Fire Emblem: Gilmore Girls, a free mod that either turns Fire Emblem: Sacred Stones into a 2000s network drama, or Gilmore Girls into a classic choice-based story game, depending on your perspective. Lorelai, Rory, and multiple other residents of Stars Hollow are playable, all represented by screencaps charmingly photoshopped onto the pixel art backdrop. You’ve four custom maps to explore, and as the Itch description points out, this is the rare depiction of a healthy mother-daughter relationship in, well, anything.

Dobbe writes that this was a Christmas present for her partner, in return for him watching Gilmore Girls with her all through last year. You can download it on itch – you’ll need a rom of Fire Emblem: Sacred Stones, and software that applies .ups patches, to run it.

If you’re a Supernatural fan, you might know that Sam Winchester actor Jared Padalecki had a recurring role early in Gilmore Girls as Rory’s boyfriend Dean. The below screenshot, representative of the low ebb of Rory and Dean’s relationship, makes all of this completely worthwhile. 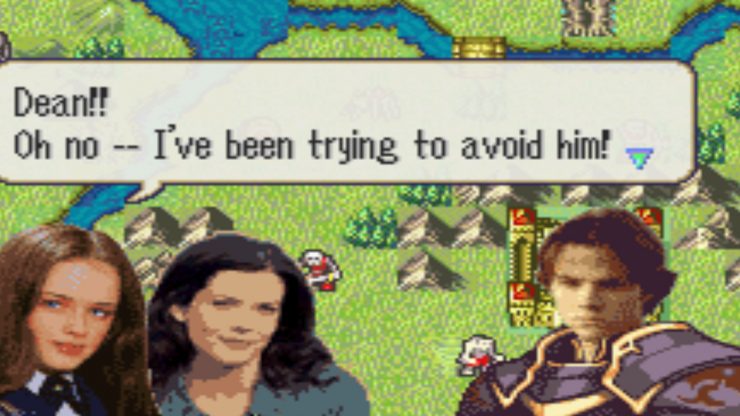 And you can find a few other screenshots and clips around Twitter, too.

Mods are asleep time to share my latest project:
✨FIRE EMBLEM: GILMORE GIRLS ADDITION.✨
That’s right.
I made a 1-hour FE8 mod about Gilmore Girls for the literal millions of people who are fans of both franchises.
(👇🏻Play it now!👇🏻)https://t.co/iuarFujIt5 pic.twitter.com/fxDF8FWyHa

Dobbe works for the studio Rose City Games, whose games you can check out here. We can only hope this kicks off a boon of teen dramas modded into videogames. One Tree Hill meets Crusader Kings 3, Dawson’s Creek meets Skyrim, Everwood meets Red Dead Redemption 2, and, of course, Drake and Josh meets Doom. We have the best anime games if you want something similar to Fire Emblem. We don’t have a best Gilmore Girls games list, but if we did, this would be number one.

{"schema":{"page":{"content":{"headline":"Gilmore Girls meets Fire Emblem in this mod straight out of every millennial’s dreams","type":"news"},"user":{"loginstatus":false}}}}