Godfall is fine. The combat is enjoyable enough to make you check the loot you’re hoovering up to see if it improves your build, and you won’t mind following the quest marker to the next big scrap to go all over again. At first. But developer Counterplay Games struggles to develop this core combat loop, and after a couple of hours it starts to feel repetitive and worn.

Godfall is a looter-slasher action-adventure game made by the folk behind Duelyst and published by the people behind Borderlands if you’re feeling generous, and Aliens: Colonial Marines if you’re not. You play a fallen knight named Orin, and are trying to stop your brother from ascending to godhood at the expense of, well, the world. Also, he tried to kill you by knocking you off a large tower. It’s fair to say you aren’t on the best terms.

Your quest to sort him out involves clearing realms that are connected to a tower that also serves as some cosmic elevator. You whack foes with your sword, collect tokens to face a boss, and then ascend to the next floor to do it all over again, just in slightly different surroundings, whacking slightly different foes.

Making repetitive tasks not feel repetitive isn’t a challenge unique to Godfall. Far from it, actually. Most games like Borderlands have to pull off something extremely clever to make the ‘grind’ feel less noticeable, or preferably rewarding. For all Destiny 2’s faults, the feel of the gunplay remains terrific, and it’s easy to get lost in any of the gorgeously illuminated alien environments. Borderlands doesn’t place as much importance on individual weapons as Destiny does, but their endless random perks are so silly and full of character that you can’t help but feel excited every time a purple or gold item pops out of an enemy – the Gun Gun, a gun which literally fires other guns, is impossible to forget. 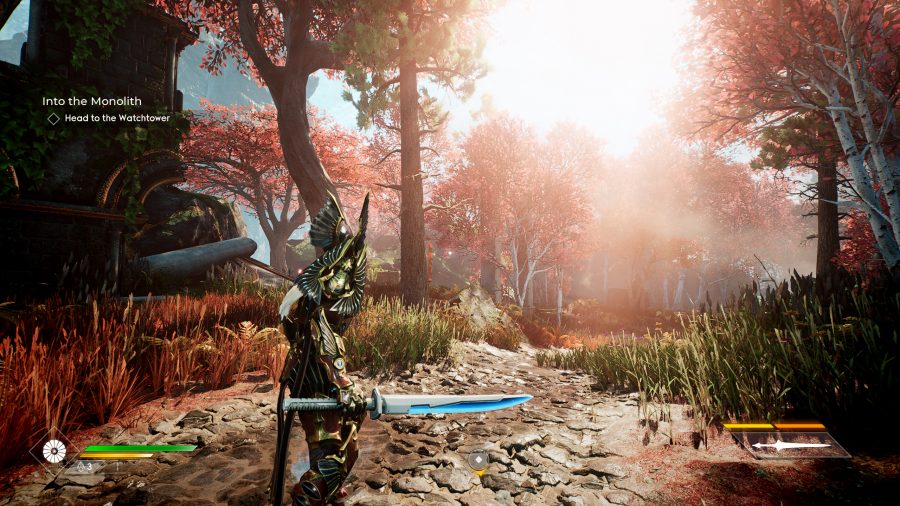 One of Godfall’s better features is its combat. In a tried but true formula, you have light and heavy attacks, and a dodge ability. It isn’t too tricky to read an enemy’s attack, and it does feel satisfying to side-step a foe and bop them on the noggin. Every time you level up, you can spend points in a skill tree to learn new abilities or strengthen old ones. Pulling an enemy towards yourself with a hook feels cool in isolation, but some clunkiness in the animations stops me from stringing the move into any powerful or visually satisfying combo.

You're given snippets of story to provide some context, but quests don't differ significantly

There’s also a versatile array of Godfall weapons you can find, upgrade, or dismantle. I went for the dual blades as I enjoyed their rapid attack speed, but you can easily bludgeon your way through Godfall with a honking big hammer if you want to take it slow. I appreciate the flexibility of the game’s forging system – it allows me to make my dual blades an Exotic-tier weapon without too much effort, and materials are readily obtainable from dismantling other Exotics and completing quests, so there’s no need to chase higher tier loot if you prefer a particular playing style. I couldn’t, however, tell you the name of any of these weapons.

You find one on the ground, equip it if it’s better than what you have, and then go on your merry way. I’ve seen no sign of any particularly exciting weapons to work towards, nor any with interesting quirks or modifiers beyond basic stat bonuses. Not ideal for a loot-driven game. 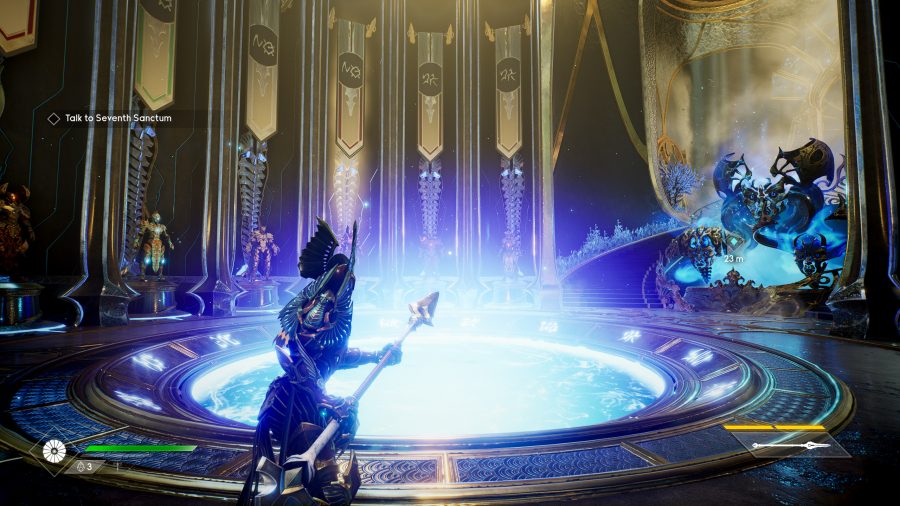 Godfall doesn’t deliver a compelling power fantasy, either. Destiny 2’s community is driven to outfit their Guardians with the best gear and the latest fashions, and it’s because they can – the game’s scope for creating intricate, powerful builds or a bespoke look is huge and only set to grow with transmog on the horizon. Its class system helps further: you can play as a rogue-ish assassin, a space wizard, or a hulking mass of muscle. In Godfall, you play as an unlikeable, dour protagonist who can dress up in something called a Valorplate when you unlock them. These suits of steel do look quite striking, and tie into the game’s high fantasy theme, but the buffs they come with aren’t notable enough to change the way you play.

While the combat is enjoyable, it’s unlikely to distract you from the grinding pattern of Godfall’s missions. You load into an open map and a quest marker takes you from place to place, battling a constant tide of enemies until the quest completes. That’s really it. You’re given some snippets of the story in an attempt to provide some context, but quests don’t differ significantly. Sometimes you’ll be asked to smash something or guard an area for a bit, but it’s typically just an excuse for more of the same. Maps do change from realm to realm, so at least you’re given something new to look at, but they don’t feel particularly alive and you aren’t given any reason to care about the people who inhabit them. 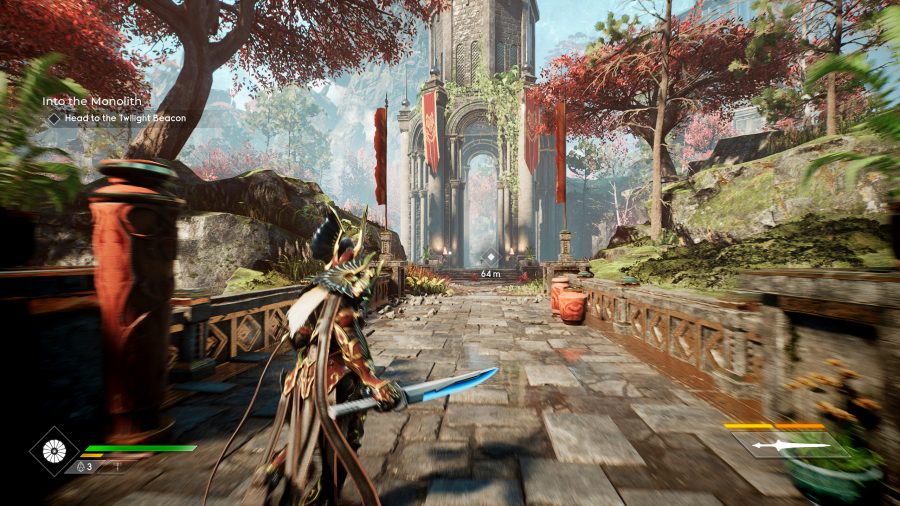 While Godfall can feel good from moment-to-moment thanks to a serviceable, occasionally rewarding combat system, it’s not enough to sustain interest when the game around it is so uninspiring. It’s not all bad, but you’d hope for more if you’re buying something for next-gen prices.

Godfall's tried and trusted combat feels pleasant from moment-to-moment, but doesn't do enough to distract from an otherwise hollow experience.