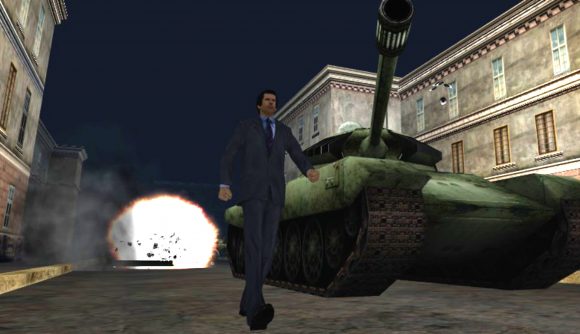 The long rumoured and desperately hoped for GoldenEye 007 remaster could be here as soon as the “next couple of weeks”, according to a new report. The re-release of one of the best FPSs ever made should be coming to PC, Xbox, and Nintendo Switch at least – but will it be as soon as this month?

It’s been rumoured for a long time – or mostly, just really wished for – that Rare’s N64 classic James Bond FPS GoldenEye 007 would finally get a multiplatform remaster and re-release. A year ago there was a leak of an entire prototype build for a GoldenEye remake that seemingly got cancelled, but just last month the game suddenly got an Achievements list – strongly suggesting a re-release was imminent.

Now, according to games journalist Jeff Grubb on the latest GrubbSnax podcast – and apparently verified by a source of VGC – the GoldenEye 007 remaster is “probably still coming pretty soon”, maybe even as soon as the “next couple of weeks”.

Jeff Grubb suggests that the reason GoldenEye wasn’t at the recent Nintendo Direct show is that Microsoft is going to be the one that announces it. “Goldeneye 007 is a cooperative agreement between Nintendo, Microsoft, and MGM, the movie studio that owns James Bond,” he adds. The previous remaster was cancelled partially because of problems between Nintendo and Microsoft, but now the two companies have “realized they’re not directly competing” – which is how the Microsoft-owned Rare’s Banjo-Kazooie is able to appear on Nintendo’s online service.

Grubb expects GoldenEye to be “a joint announcement” between Microsoft and Nintendo, that will probably happen very soon. It should be pointed out that this is mostly speculation and so shouldn’t be treated as fact, although VGC’s confirmation and the appearance of the GoldenEye achievements list suggests a remaster announcement is possible.

As for what GoldenEye 007 would’ve been like if it’d released on PC instead of N64, check out our article on the subject.