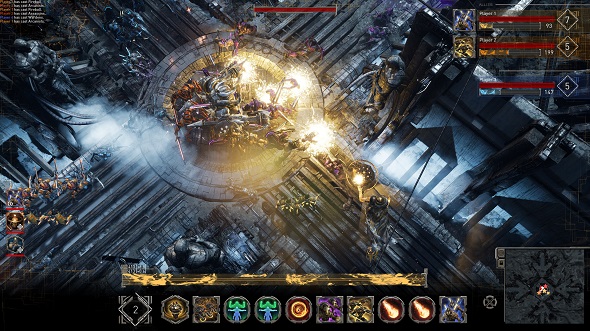 After several years languishing on the sidelines, real-time strategy is mounting a serious comeback these days, and the revival is bringing fresh ideas to the genre that had for a long time become dominated by StarCraft. Take Golem Gates, and indie RTS from Laser Guided Games – it’s a fairly classic take on RTS action, but using a cooldown-based deckbuilding system for unit creation.

Here’s our picks for the best strategy games available on PC.

As the Harbinger, you use “glyphs” – or cards – to summon creatures and use powers drawn from nanites leftover in the Ash, the destroyed remains of a war-torn world. Golem Gates does away with the traditional RTS building and economy, and pushes that element of strategy into the deck building of the metagame.

You’ll unlock new glyphs as you play through the campaign, and once you have a good selection of them you’ll be able to focus your deck on speedy rush units, defensive turrets, or big bad bruisers – all of which can be enhanced by various spells if you decide to bring them along.

Golem Gates has a distinctive look, too – the North Carolina-based developers have experience both in triple-A game design and with big-screen movie special effects, such as Transformers and Marvel properties. Here, the look is of a dark future fantasy world, kind of a destroyed version of Thor’s Asgard.

I’ve enjoyed Golem Gates’ streamlined take on battles. They’re compact, brief affairs that get underway quickly. You’ll draw cards and start plunking down units right away, and things just escalate from there as you push out to capture nodes and prod enemies. Having the Harbinger as an on-screen entity means you’ll be focused there, deploying units mostly to around his position.

Golem Gates launched last month after a brief stint in early access. Laser Guided Games say they have additional content planned, but they told me they won’t be introducing microtransactions. Every glyph is unlockable by playing the game normally.

You can check it out on Steam.