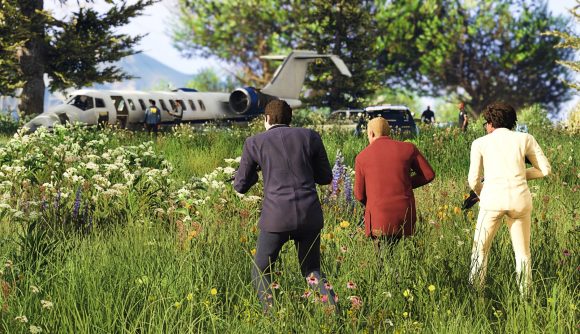 It’s that time of the week, folks. Thursday is reset day in GTA Online, so all your usual favourites are dipping into Los Santos to see if there are any good ways to make dosh or any deals worth snapping up on a new car. Rockstar Games will have an official rundown on its Newswire later, but the updates are already here, so there’s no need to wait.

It looks like we’re getting some new content this week as players are stumbling across seven new Survival modes. We had some idea this was coming, as Rockstar revealed plans for new races as well as Deadline and Survival modes earlier this year. You’ll also find that all Survival modes are offering double the usual rewards to mark introduction of the new maps.

If Survival modes aren’t your thing, though, you’ll also find that all freemode events are offering triple the usual rewards. You’ll need four people in your lobby for these to happen, so make sure you’ve met the requirement to avoid awkwardly hanging around.

The GTA 5 podium car for the week is the Vapid Retinue Mk II, if you fancy trying your luck on the wheel. If you want to know what else is on discount, you can find it below:

Rockstar tipster Tez2 is also reporting that GTA Online’s new update is launching in around two weeks, which would put it one week after Red Dead Online’s Blood Money update. Keep in mind, though, that this has yet to be confirmed.

The new DLC is releasing two weeks from now.#GTAOnline

If you’re looking for some GTA 5 mods or GTA 5 cheats to spice up your offline sessions, you know where to click.