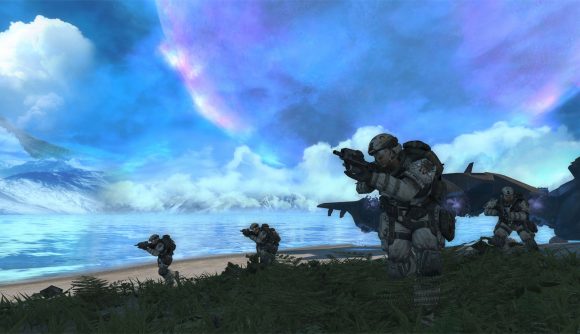 The next piece of the Master Chief Collection to hit PCs will be the one that started it all. Halo: Combat Evolved is coming to PC later this year, and test flights – 343’s term for beta testing – will begin for members of the Halo Insider program next month. That’s a little later than expected, but not by much.

In a post spotted by Windows Central, 343 outlines its plans for the Master Chief Collection’s development over the next several months. That will include some test flights for features on their way to Halo: Reach, but the big news is undoubtedly the announcement of the Halo: Combat Evolved Anniversary flights.

343 says the test periods will be focused on specific aspects of the game, but these cover most of what players consider to be the Halo experience. The tests will examine validating dedicated servers, peer-to-peer connections, and crossplay between the Windows and Steam versions of Halo: Combat Evolved. 343 is also testing a new user interface for customization in the game and the progression system for the next season of Combat Evolved.

343 says it plans on flighting “multiple areas of limited content to participants of the flighting program” for Combat Evolved, and that those flights will cover the single player and co-op campaign, multiplayer, customization, and progression.

You need to be a Halo Insider to participate in the test flights, but signing up isn’t too complicated. Just head to the Halo Waypoint site log in with your Windows or Xbox ID. To be considered for PC flighting, you’ll need to link your Steam or Microsoft account and upload your system information file as compiled by the DirectX Diagnostic Tool (type “dxdiag” into the search bar on Windows 10, then select “Save all information” when the tool finishes its scan).

Once that’s done, you’ll be in the pool of potential selectees for February’s test of Halo: Combat Evolved Anniversary.