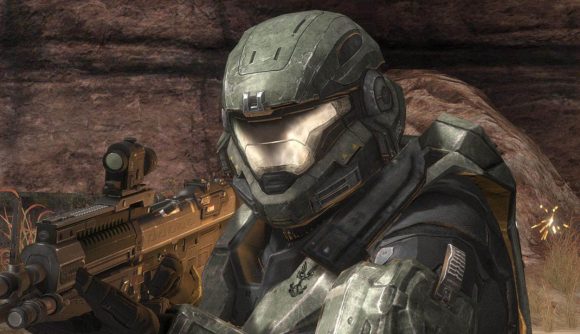 After months of waiting and delays, the first beta testing for the Halo Master Chief Collection on PC finally kicked off this weekend – but it disappointed a lot of people hoping to try out Halo Reach on PC for the first time, because only around a thousand players were invited. What happened next was obvious – the beta leaked online. However, developer 343 Industries and Microsoft are now warning players that they will be banned if they try to play it.

The first PC-based flighting for Halo Reach began on Friday and runs until tomorrow, and contains the Halo Reach campaign mission ‘Tip of the Spear’. As the team told people signed up to the Halo Insider flighting program, the scope of this first test is being kept “very small” in scope – so most of the eager volunteer testers weren’t invited.

While the studio is already promising that the next flighting beta test for Halo Reach will be bigger and will invite a lot more players, the first beta has – perhaps inevitably – leaked online. However, 343 Industries is warning people against downloading or playing it.

As pointed out by Community Support & Engagement Coordinator Tyler ‘Postums’ Davis as an additional note to the forum post about the first flight, “it has come to our attention that the Halo Insider flight has been illegally distributed online. If you download or play this illegal copy, we have the right to ban all associated accounts and remove you from all current or future 343 programs.”

Presumably you will still be allowed to buy and play Halo Reach when it comes out, but then again players will have to link the game to an Xbox account to play online. It’s unlikely 343 has the power to ban users from Xbox Live, but it’s probably not worth the risk just to play one mission from a PC port of a game from 2010. At the bare minimum though – you’ll be banned from any further testing initiatives.

If you weren’t invited to the first Halo Reach test this weekend, don’t despair (we weren’t either) – as mentioned above, the second flighting test will be more expansive than the first, and most likely will be based on Reach’s popular Firefight mode. This is playable single-player and co-op, and it’s essentially the Halo horde mode. It’ll happen fairly soon, once the team is done evaluating the feedback from the current flight.