The opening moments of the first-ever Star Wars film are among the most memorable in the entire series: Leia’s Corellian Corvette fleeing from the gargantuan white wedge of a Star Destroyer, its irregular hull bristling with cannon turrets and gradually filling the screen. When we meet Rey, several real-world decades later, she’s working as a shipbreaker – one of the many who make their living in the unglamorous work of stripping crashed and decommissioned capital ships for scrap.

There are more than a few moments during my time playing Hardspace: Shipbreaker at PAX East when I wished for a Jedi power or two. Like Rey, I’m yanking bits off a decommissioned ship, but instead of the Force, all I’ve got is a Dead Space-style plasma cutter. I’m floating in an orbital shipyard high above the Earth, watching the hatch I’ve just cut off sail away into the void, propelled by the force of the pressurised atmosphere inside – which I’d failed to take into account before busting the hinges.

Fortunately, I have something that’s almost the Force: an energy tether that works like a lasso or grappling hook, depending on what you’ve aimed it at. Earlier, I’d used it to snap off two radio aerials the company had asked me to retrieve, and now I fire it off after the runaway hatch cover. Success!

Well, a qualified success. I’ve managed to lasso the hatch cover, but it’s heavy enough and traveling fast enough to give me a good yank on the other end of the line. This is zero-G, after all, and momentum and inertia are always in play, with no terrestrial atmosphere or gravity to slow me down. 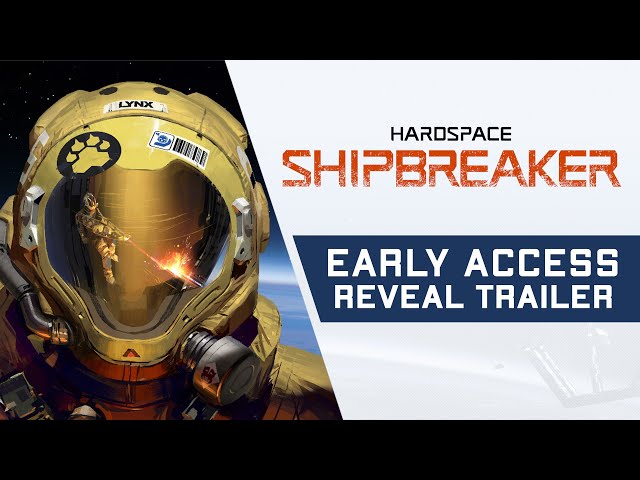 On paper, Hardspace: Shipbreaker sounds as though it should be a meditative game. You’re a shipbreaker, and it’s up to you to slice up starships into component parts and materials and put these into a bin. I had imagined an exercise similar to House Flipper or perhaps Spintires: something purely mechanical I could zone out and play while listening to a podcast. Instead, Hardspace: Shipbreaker’s zero-gravity environment and cramped, unpredictable working spaces make it properly demanding. This is a game you can get good at.

More and more, people aren't looking for power fantasies, but for recognition of these day to day jobs

There are no Jedi powers to be found here, though. Hardspace: Shipbreaker isn’t a power fantasy – there are no storm bolters or Needlers to master, no alien swarms to defeat. This is an intentionally blue-collar experience, a working class game for a working class time. You’ve beaten millions of other applicants to land this job, only to discover that you’ve accumulated a massive debt and signed away most of your rights to a company that cares about you only to the extent that you can make numbers on a spreadsheet get larger.

“Most of humanity has moved off to other parts of the solar system, and Earth has become a bit of a backwater,” lead designer Elliot Hudson says. “You live on Earth. It’s not a great place, so you take this extremely hazardous job at the Links Corporation where they salvage these derelict starships that can no longer travel through the solar system. They pay for your equipment, they pay for your transportation, they paid for this salvage station you work at, and now you are billions of credits in debt to them.” 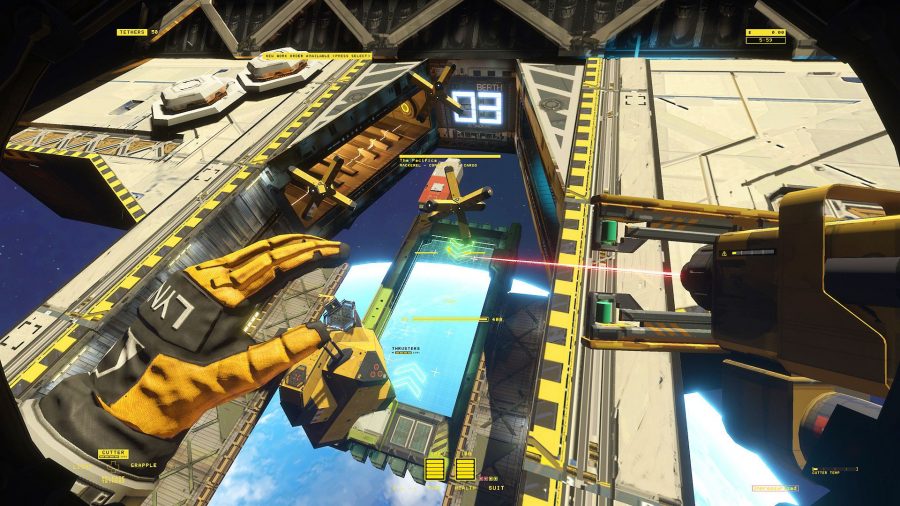 To pay it off, you’ll have to scrounge what you can from the hulks that get dragged into your salvage yard. Everything has some value, and I do mean literally everything: computer equipment and engine internals, of course, but also the metal plates and struts that form the hulls of the derelict craft. You can go about cutting them up however you want; I used the aforementioned plasma cutter to saw a hole through a bulkhead and then into a storage bay.

It’s not a free-for-all by any stretch. Your cutter is powerful – there’s this intensely satisfying audio kick as it charges, like the whine of a big capacitor powering up – and that means it can cut into systems that you’ll want to keep undamaged; fuel and coolant lines run through the ships, and you can accidentally find yourself in serious trouble. There are other dangers as well: zero-G physics can create major hazards, and the wrong set of moves outside can find you crushed between two giant pieces of starship as they slowly and inexorably drift into each other.

It’s dangerous work, and appropriately so: real shipbreakers, working in places like the coast of India on decommissioned warships, often work without much in the way of protective equipment. Hudson says his studio, Vancouver-based Blackbird Interactive, has based Hardspace: Shipbreaker on these real-world daredevils. 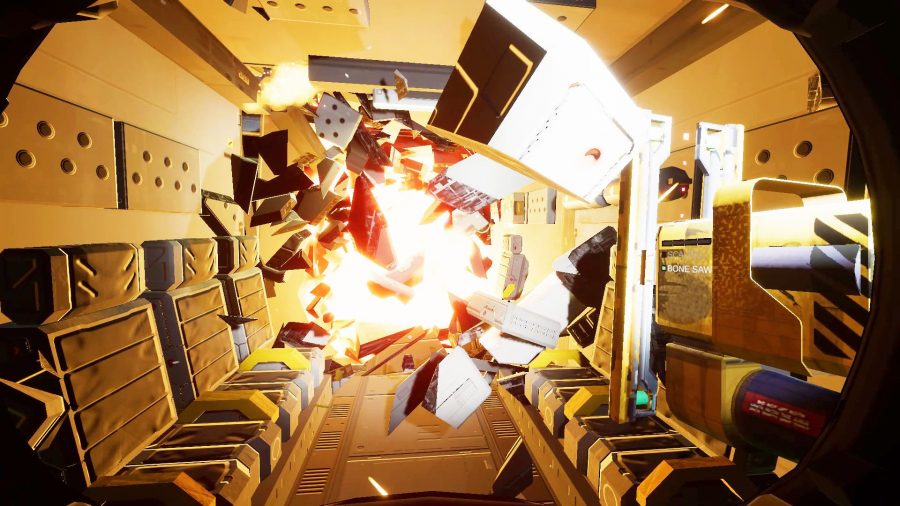 “Hundreds of dudes crawl on board with blowtorches and start to carve it apart, and start to shove over these huge sections of hull,” he said. “Obviously it’s not a really good job for anyone to be working on, but there’s something awe-inspiring about seeing these massive vehicles slowly being taken apart. It’s something we’ve always thought was really intriguing.”

“We wanted to make a game that kind of combined those two things, where you could see these really cool spaceships, but also crawl inside them and dismantle them from the inside,” he said. “We wanted everything to feel really heavy and physical. When you cut into it we want it to feel dangerous, like you’re using a chainsaw.” 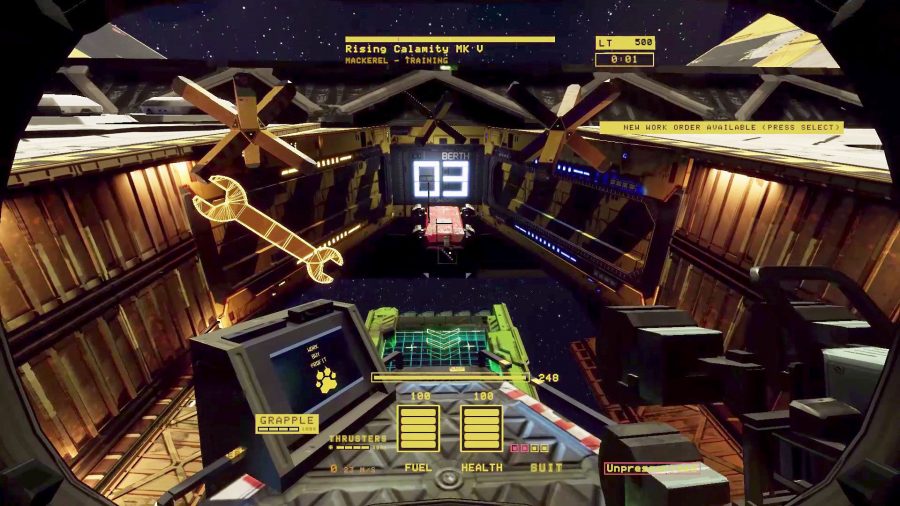 The ships are also unpredictable, which adds to the danger. Hudson explained that while the makes and models have been designed by hand, the game procedurally generates elements of each specific layout to reflect idiosyncrasies of the particular clients for whom they were originally built. That means you can’t ever go into a ship and know exactly what you’re going to find, even if you’ve pulled the same model apart before.

Hudson says Hardspace: Shipbreaker is designed as a game about the working class and labour – issues that are now getting some overdue attention in games. Industry practices like ‘crunch,’ layoffs, and unionisation have finally cracked into the forefront of discussions about the business of games, and games themselves are starting to reflect this increased awareness.

“You’re seeing a lot more games that are about the gamification of regular-type jobs, blue-collar jobs,” Hudson said. “That was always something that was important to us, that the character that you’re playing is just a blue-collar worker – you’re not a space marine or some hero character. It’s really just someone trying to make a living in a very hard industry.” 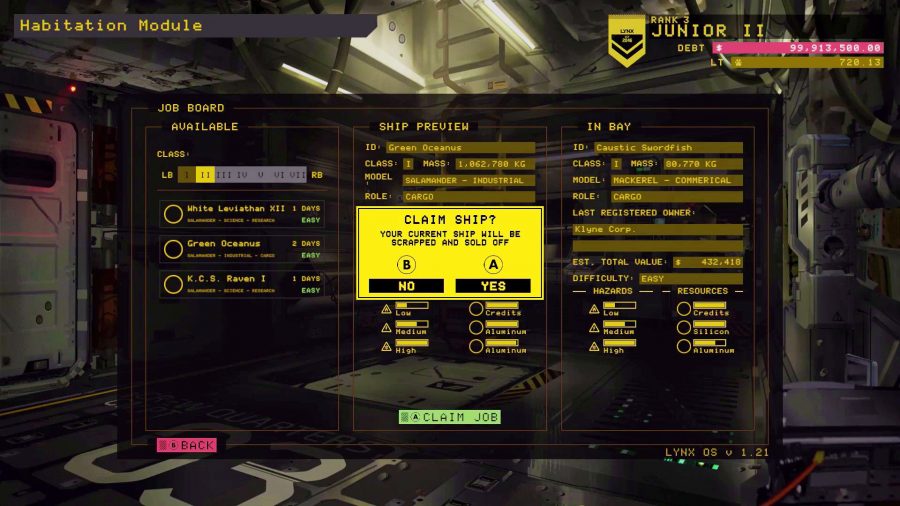 While Hardspace: Shipbreaker is set in the distant future, Hudson says it has roots in workers’ issues that are at least 100 years old.

“We took a lot of inspiration from people in the 1920s; the ironworkers that built our state buildings were basically building civilisation,” he says. “And that’s what you’re doing by salvaging: these materials are going to build the very forefront of civilisation, but one you’re not really a part of. You’re kind of being exploited. But it still feels like you’re contributing to something bigger than yourself, and that was really important to us.

“I think that’s something that people are looking for more and more,” Hudson concludes. “Not necessarily for power fantasies. They’re looking for recognition of these day to day jobs.”