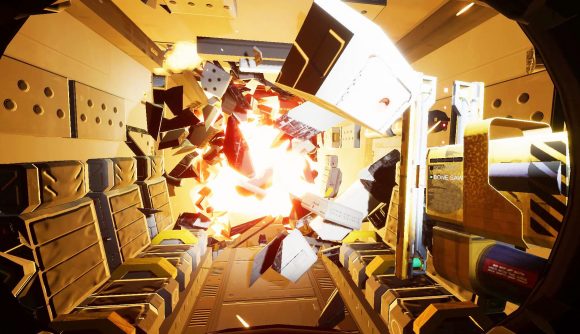 Hardspace: Shipbreaker has gotten a new update that adds a whole new dimension to the sci-fi simulation game’s salvager experience. Now you’ll need to be on the lookout for dangerous radiation while cutting up scrapped ships. Make the wrong cut or bump a part the wrong way, and you’ll be sending toxic radioactive particulates into the environment around you – leading to permanent damage to your body, which of course is company property.

With update 0.5.0, you’ll start encountering radiation once you’ve hit certification rank 9. You’ll find radiation filters in ships rated at hazard level 6 and above: they appear in wall-sized containment units, and you can pull them out of ship interiors and crawl spaces. You’ll want to be extremely careful with these, because the slightest bump or jostle will send the radioactive dust they’ve been collecting out into a cloud that gradually expands and causes damage to any organic matter or electronic devices it touches.

Worse, fire or cutter beams will agitate the particles, making them even more damaging and dangerous for a short period of time. They’ll eventually dissipate on their own, but you can manage them with coolant.

There are some additional changes in this update as well. The HAB Screen, which you’ll see while you’re resting between salvage contracts, has been reworked – although the version you see in today’s update isn’t final. Developer Blackbird Interactive says the style will eventually be incorporated into a fully 3D HAB environment for the full 1.0 release of Shipbreaker.

Hardspace: Shipbreaker is 30% off on Steam! 🎉

Your new job in outer space is waiting for you: https://t.co/TJHoPQOzRb pic.twitter.com/DcXSJghysw

The weekly R.A.C.E. is now a daily race called the Cutter’s Challenge, and the devs say they’re hoping to get some player feedback on the change in cadence to the mode. They’ve also made some big improvements to the Javelin ship class, with the intent of smoothing out the learning curve of Shipbreaker generally. That fits with how they’ve spaced out the introduction of new tools and hazards, which has resulted in a more intuitive journey from newbie to salvage yard expert.

You can read the full patch notes on Steam. They include a complete rundown of the new features, as well as list of bug fixes that update 0.5.0 brings along with it. If your curiosity has been sufficiently piqued, now’s a good time to buy – Hardspace: Shipbreaker is currently on sale for 30% off the usual price.