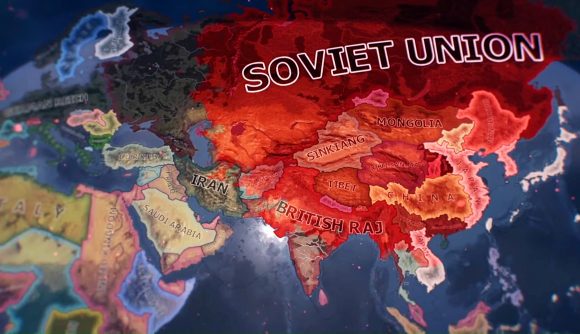 If there were any doubts about Hearts of Iron IV being Paradox Interactive’s most popular grand strategy game, I imagine they can be laid to rest with the news that the WW2 game attracted over a million active players for the first time during November 2021. This number is likely to include multiple platforms, including Steam, the standalone version, as well as potentially PC Game Pass. This also represents a new milestone, one the dev team is understandably quite pleased about.

The news comes via the Hearts of Iron IV Twitter account, and the developers have released a few other choice stats as to what those chosen million have been getting up to. Apparently, they started over 400 million wars. They also fired a lot of nukes, with Germany bearing the brunt at 223,500. The United States escaped with a more manageable 97,574 nuclear attacks.

The most recent 1.11 ‘Barbarossa’ patch which accompanied the No Step Back expansion introduces the ability to build railway lines through individual provinces – within the first week the Hearts of Iron IV player base built 43,373,197 railways. The infographic also has fun facts to share covering the number of focuses completed, the number of “cryptos cracked”, as well as what the top five surrenders are. Surprising no one, the top spot goes to Ethiopia.

In November, we hit our favourite milestone to date; 1 MILLION ACTIVE PLAYERS!

Thank you for playing our game! It means the world to all of us on the Hearts of Iron team and at @PdxInteractive as a whole

To celebrate, we thought we'd throw you some neat statistics 📈

We haven’t done a formal review of No Step Back, but from the testing done so far it’s clear to me that the strategy game is living its best life right now thanks to the new premium features and the free patch. It seems the players agree, considering so many of them have decided to jump in and play a game that’s over five years old now.

If you want to know more you should check out our guide to the current Hearts of Iron 4 meta, as well as how the new supply system works.