Let’s make a list of things we want in a ’90s-style retro shooter: we’ll need gross demons that explode into gibs, guns that don’t need reloading, ludicrous running speed, and a heavy metal version of Hell to traverse as we’re ventilating our meat puppet enemies. Hellbound, out today from Saibot Studios, manages to check every box on this list, but still misses the mark by a wide margin and, for all its earnestness, winds up being a shallow and unremarkable experience.

Hellbound is a violent first-person shooter that looks like it was made for a Law & Order episode about violent first-person shooters. There are the enemies that come apart like cherry pies dropped from a third storey window. There’s bright orange lava and sludgy biker metal guitar riffs. And there’s the gruff, basso profondo protagonist who calls everything “motherfuckers.”

The idea is to recapture the joy of ’90s FPS games that did the same things, and Hellbound isn’t shy about tattooing its influences onto the worryingly vascular bicep that would have been covered by its torn-off sleeve. “Time to get serious,” growls hero Hellgore, as you head into a huge arena to face a swarm of monsters, in an open and clearly loving homage to Serious Sam.

Unfortunately, Hellbound only manages the most shallow pastiche of the classic shooters it loves so dearly. “Warning! This game is being made like it was the ’90s. Some people may find it too difficult”, a splash screen advises as you fire it up. Difficulty here translates to an inadequate checkpoint system and enemies that can spawn behind you and kill you in a single hit (especially as you often won’t have full health due to Hellbound’s ’90s-style non-refilling health meter – not an issue in itself, but one that compounds problems elsewhere). The effect is annoying rather than engaging, and it’s emblematic of Hellbound’s failure to fully understand and emulate its influences. 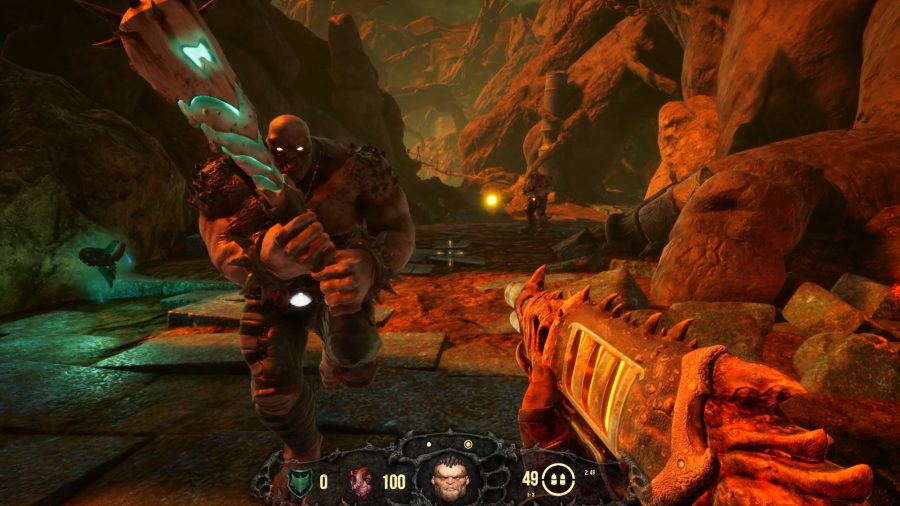 While we’re on the topic of difficulty, for all its ‘hardcore’ posturing, Hellbound’s brief campaign took me just under three hours to finish, and the end arrives abruptly with an arena showdown with a large but slow-moving boss that I managed to take down on my second attempt. Hellbound is light on content: there are a total of seven levels, one boss fight, only three enemy types (though grunts can wield different guns), and six weapons (if you’re feeling generous and count your fists). There are spots in a couple of levels – Dead Forest in particular – that stand out as visually striking, but in general the environments are over-lit and covered in muddy, flat-looking textures.

Jonesing for nostalgia? These brilliant old games still hold up

While shooting feels good, the sparse selection of weapons contains nothing unique or creative. You have a machine gun, a shotgun, a better machine gun, a rocket launcher, and (curiously) two melee options, neither of which are particularly useful. 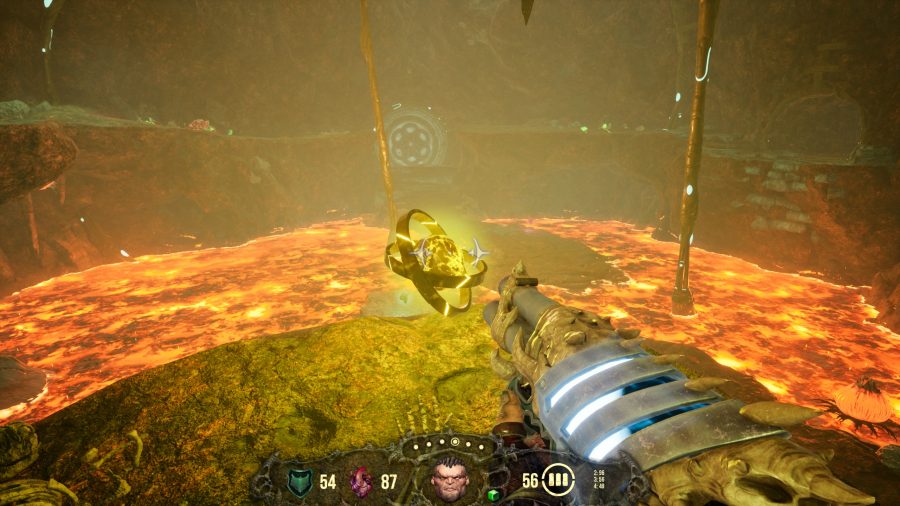 There’s damnably little else to comment on in Hellbound. The brief campaign is accompanied by a survival mode, which drops you into one of the Serious Sam-style horde onslaught segments you encounter periodically in the levels.

Hellbound is fixated on its influences' superficial accoutrements, neglecting the masterful design at their core

While Hellbound is derivative to a fault and sparse, it must be said that its macho bluster and hardcore posturing don’t come across as even slightly cynical. It’s clearly the work of people who unreservedly love the games they’re trying to evoke. The trouble is that it’s a very childlike love, one I’ve certainly felt myself. One of the key reasons games like Doom and Quake and Duke Nukem 3D have stuck in the memories of Gamers of a Certain Age is because they were forbidden to many of us. The guns, the gore, the foul language, and the silly biker Satanism marked these games as firmly off limits to us while we were growing up. The fact they were forbidden gave them a kind of mystical power in our imaginations, and playing them felt like an act of religious and moral subversion.

Hellbound is chasing that specific high, even though there’s no subversion left to be mined from demon guts or drop D guitar riffs. Nevertheless, Hellbound is fixated on these largely superficial accoutrements, and neglects to consider the masterful design achievements that were the true magic at the core of its influences: the careful interplay of Doom’s enemies, or the level design wizardry Duke Nukem 3D pulled off with its 2.5D Build engine. Without this, and by explicitly referencing the giants, Hellbound falls into the Soulslike trap of reminding players of something they’d rather be doing.

In a day and age when you could be playing Ion Fury, Wrath: Aeon of Ruin, or pretty much anything New Blood is making, Hellbound simply doesn’t make enough of a case for itself.

An earnest but empty love letter to Quake and Duke Nukem 3D that never gets around to doing anything to call its own.