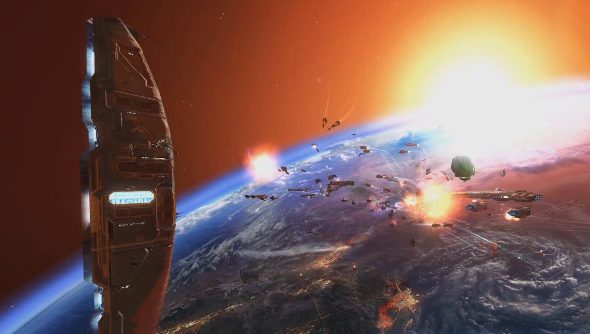 The Homeworld Remastered launch is nearly upon us, and today Gearbox just released the Homeworld 2 “story trailer” which does a nice job of showcasing the massive visual upgrades Gearbox performed, as well as the higher-stakes of the Homeworld 2 campaign. It’s not hard to make Homeworld look gorgeous, but damn if this trailer isn’t haunting.

HD remakes and remasters are are dime a dozen these days, but it’s clear that Gearbox have gone above and beyond the call of duty with their lavish update of Relic’s maiden RTS voyage through the stars.

I never played much of Homeworld 2, mainly because I never actually managed to beat Homeworld 1. So for me, this re-release is a chance to right one of the great wrongs of my gaming past: to play through the entire Homeworld series (minus Cataclysm, which appears to be lost to the ages).

When those massive super-lasters open up? Awe-inspiring stuff. And, of course, you have the original voice actress for the Mothership in this new version of Homeworld 2, which should please some series purists when the Remastered Collection comes out in two days.