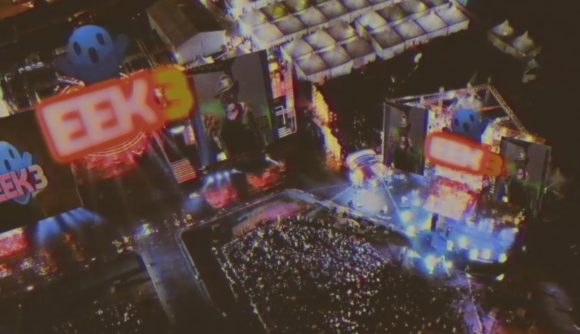 In lieu of not having any real-life games conference show floors to wander this year, several indie developers have come together for EEK3, a horror indie showcase that has its own spooky virtual show floor you can check out.

Orchestrated by the creators who put together the Haunted PS1 Demo Disc earlier this year, EEK3 featured a livestream of over 40 short horror games that use the same creepy late-nineties 3D as the first compilation. Filmed in grainy VHS texture, the stream had a skeletal figure and his ghost comrade guide viewers through all the games on offer, including some short development spotlights to pace out the hour. It’s like if Tales From The Crypt did a midnight gaming special.

Afterward, just like E3 itself, after the show you can go explore all the booths and setups the developers and studios have made for their games, created in the same low-poly decor, rewatching the trailers and ogling some of the merchandise and decoration they’ve put together. The description on Itch says the building hosting EEK3 mysteriously sprung up overnight on what used to be an abandoned mall. We’ll choose to overlook that detail because videogames are cool.

A few did jump out at us among the 40-odd that were given airtime. Arsi ‘Hakita’ Patala’s bombastic retro-FPS Ultrakill, published by New Blood, Tom Hughes’ melancholic look at an MMO game‘s last days Agony of a Dying MMO, Jinconic’s bizarre walking sim Morpheus 98, and the cyberpunk anime-like Signalis, from rose-engine, stood out on first watch.

Haunted PS1 is hosting a summer game jam for more of these strange, short-form nightmares, and you can vote for the theme here. The entire livestream can be watched below:

If you still want some scares, we got you covered with the best horror games.