The best gaming keyboard might still be full-sized, but 60% models are increasingly popular among gamers because their tiny form factor frees up real estate on your gaming desk. If you don’t mind forgoing clicky or tactile switches, there are few models better than the HyperX Alloy Origins 60, which has much of the same DNA as its beloved bigger brother.

It has a similar robust metal base, bright RGB lighting, ultra-responsive gaming performance, and – for better or for worse, depending on your preference – HyperX’s proprietary mechanical switches. The only thing that really lets this keyboard down is its lack of options, solely shipping with linear red switches and no clicky or tactile alternatives in sight.

As with any 60% keyboard, there’s a learning curve to get used to shortcuts when the physical arrow keys and numpad are missing, but with the included software and some practice, you’ll be up to the same speed as a full-size board in a week or two.

HyperX provides everything you need to get started, including a removable braided USB-C cable, a key puller, and two extra keycaps for some personalisation. The custom topographic spacebar is particularly eye-catching paired with RGB lighting, provided you don’t mind the cheaper ABS material compared to the rest of the double shot PBT keycaps. Who wore it better is entirely down to preference comparing this to the custom design on the Corsair K65 RGB Mini, but I prefer HyperX’s smoother contours. 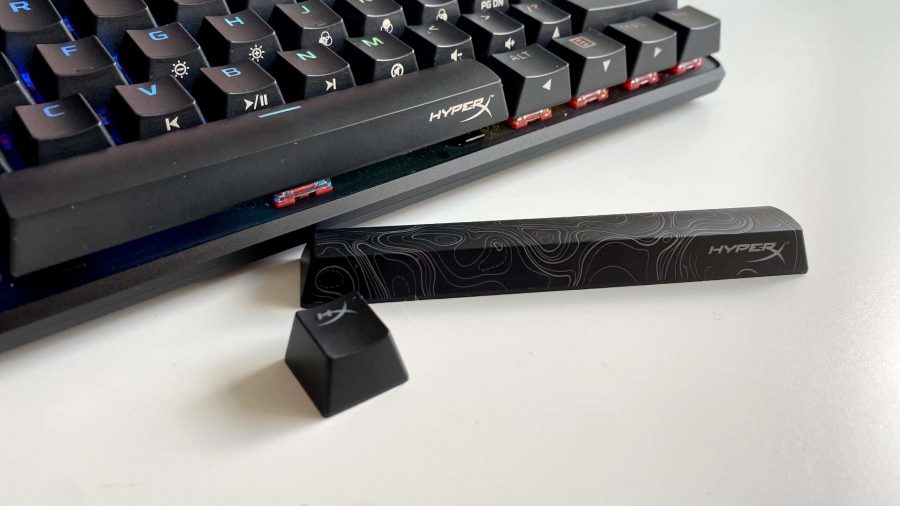 The tiny board comprises an all-black aluminium frame with zero flex, three-way adjustable feet, and double-shot PBT keycaps with markings on the legend for Fn-bound shortcuts. There’s a small ridge around the keyboard frame’s edge that looks fantastic, but it’s a bit of a dust magnet.

Not even daylight can stop the RGB lighting from shining brightly, while swapping the standard spacebar out for the included alternative makes it even more impressive. You’ll need HyperX’s Ngenuity software to customise the colour per-key, but you can adjust brightness on-the-fly and choose between seven presets – such as the standard rainbow effect – using the Fn key on the board itself.

The HyperX Alloy Origins 60 also has three built-in profiles you can personalise in the software and cycle through using shortcuts. There’s a game mode that disables accidental Windows key presses, but you can also block extra functions in this mode, such as Alt + F4 or Shift + Tab if you’d ever want to. 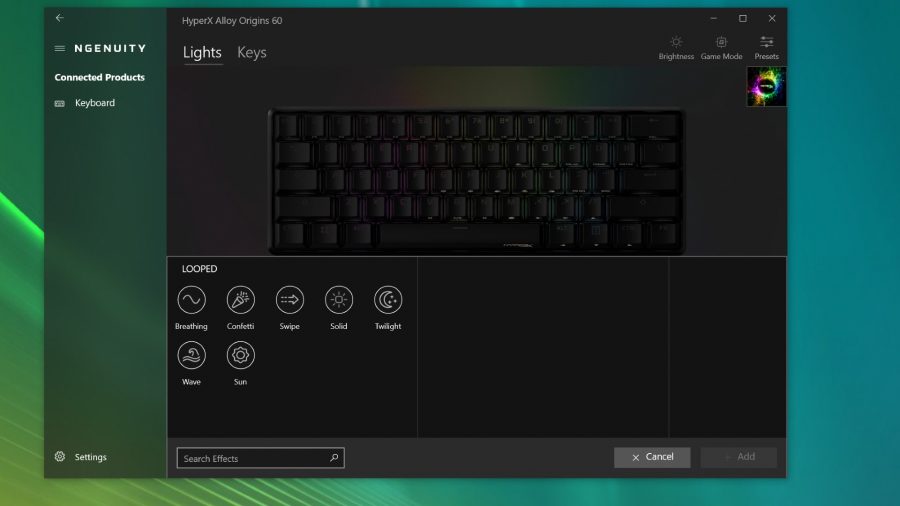 At 60% the size of of a standard keyboard, the Fn key is your best friend, enabling the function keys, media controls, and all other actions that would usually have their own place. The symbols on the legend provide a helping hand when getting to grips with these shortcuts, but you can customise virtually everything in the Ngenuity software to suit you.

By default, the arrow keys are the secondary function to a cluster on the right-hand side of the board, but several of the games I play require quick access to them. Simply switching it up so that the alt, ctrl, forward slash, and menu keys are secondary makes this much more comfortable.

Typing was a greater challenge, as moving from my full-size Razer Blackwidow often saw me reaching for keys that weren’t there. It’s an adjustment period that initially makes the HyperX Alloy Origins 60 feel clunky, but this is the same for any smaller keyboard and I was back up to my usual typing speeds after the two-week mark.

Rather than using Cherry MX switches, HyperX opts for its own solution. Unlike its full-size Alloy Origins sibling, this miniature version doesn’t offer the option of tactile or clicky switches, only shipping with linear reds. They have a shorter actuation and total travel than its Cherry counterpart, boasting 1.8mm and 3.8mm respectively, compared to 2mm and 4mm. 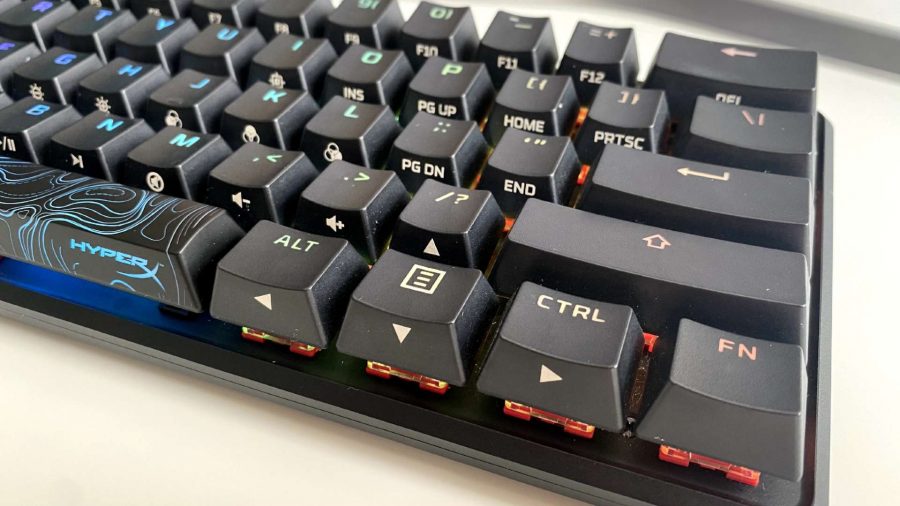 I’d be hard-pressed to notice the 0.2mm reduction here and can say with certainty that HyperX’s offering are just as fast to action with little resistance and minimal key wobble. There’s still a small audible click when bottoming out the key, which is just enough for the keyboard to feel mechanical but it’s quiet enough to keep your household sleeping tightly during your late night gaming sessions.

As a gamer and a heavy writer, the option of clicky switches would’ve made this the perfect keyboard for me as I crave greater feedback from each thwack. That’s not to say the red switches can’t offering a decent typing experience, as they’re still a damn sight better than a membrane keyboard, but you could say it just doesn’t click with me when the Razer Huntsman Mini comes with purple switches that fill that void.

HyperX’s switches use the same stem as Cherry MX, though, so you have a wide range of custom third-party keycaps available, if you get bored with this keyboard’s design further down the line. 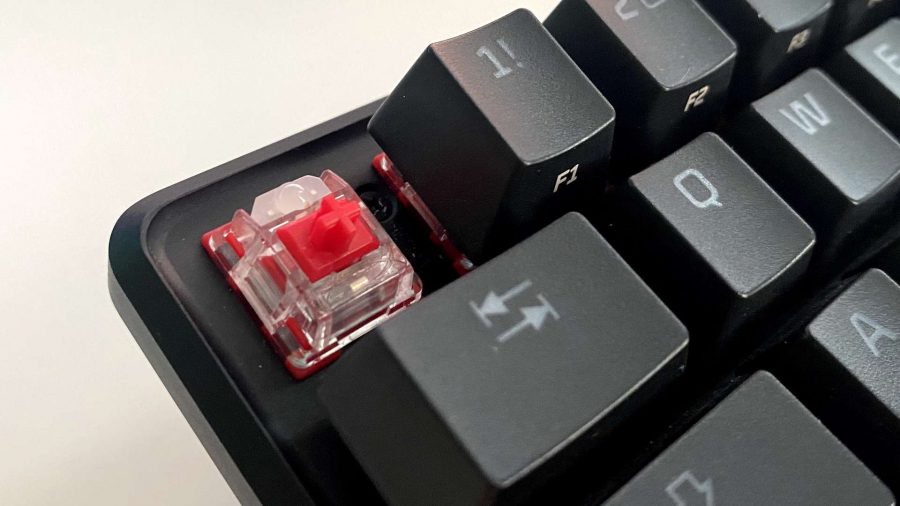 It might seem like the clear choice being the cheapest of its competition at $99 / £109, but it’s all down what switches you prefer. The Corsair K65 RGB Mini is just $10 more, pushes an 8K hyper-polling rate, and offers a choice between tried-and-tested Cherry MX Red and Speed switches – both of which are also linear. It isn’t worlds apart from what the HyperX Alloy Origins 60 offers, though, so this comes down to preference and budget.

The Razer Huntsman Mini not only presents a clicky option alongside a linear offering, but all its switches are optical. This means they’re more responsive than their mechanical counterparts and rival premium models such as the Asus ROG Claymore 2 at nearly half the size. It costs an extra $20, but this is a small price to pay if you’re hunting for a better fit.

Still, the HyperX Alloy Origins 60 is one of the better 60% models you can buy right now if linear switches are your weapon of choice, and its brilliant software helps you to adjust if you’re moving down from a larger keyboard.

The HyperX Alloy Origins 60 is cheaper than many of its rivals, and its aluminium frame, PBT caps, and additional vibrant RGB spacebar gives the whole package a premium feel. However, the single option of linear red switches is restrictive, and some will struggle to make the switch to a 60% keyboard.