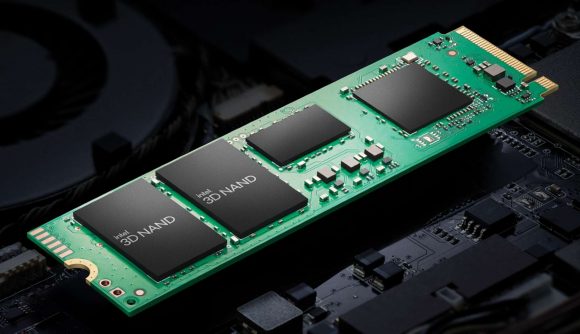 When picking up the best SSD for gaming, some of the budget options are getting seriously impressive nowadays – as we found in our WD Blue SN550 review. Intel isn’t the first brand you’d usually think of for storage, but it’s just announced (via PCWorld) its latest budget-oriented NVMe SSD, called the 670P. Intel’s Rocket Lake-S lineup is launching on March 30 with PCIe 4.0 support, but this drive is still using the PCIe 3.0 standard, which is to be expected in the budget SSD market.

The drive uses a quad-level cell NAND, unlike the technically superior triple-level cell flash memory used in most rivalling SSDs. Despite this, the rated sequential read speed for the 670P is still 3500MB/s – maxing out the bandwidth of the PCIe 3.0 standard – and the sequential write speed is an equally respectable 2700MB/s.

This is almost double the sequential read speeds of its predecessor, the 660p, rated at 1800MB/s, and a 50% jump in sequential write speeds. Intel also claims that the 670p has 20% more endurance, which would give it around 480TBW (terabytes written) for the 2TB  model, 240TBW for the 1TB capacity, and 120TBW for the 512GB model – although Intel has yet to confirm these figures, that would put the endurance a little lower than rival TLC drives.

The controller has been tweaked to improve performance in mixed and low queue depth workloads (read: much faster in general usage). This is backed up by a PCMark 10 benchmark from Intel against its previous offering and rival SSDs, although specific brands sadly aren’t given. 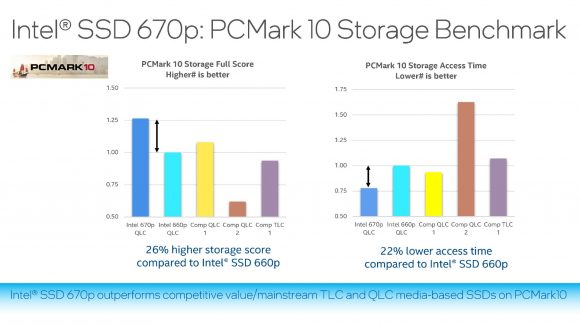 Originally released with similar prices to PCIe 4.0 SSDs, despite still rocking the older PCIe 3.0 QLC standard, Intel has backtracked two days after launch by cutting the cost to something more mainstream. The 512GB model now carries a $70 price tag, the 1TB version costs $130, and the 2TB capacity sits at $250, shaving $20, $25, and a whopping $80 off respectively. With up to a 24% drop, the 670p now hovers just above the price of our favourite SSD, the 1TB Adata XPG SX8200.

If your device can no longer be considered the best gaming laptop or best gaming PC, this SSD could be perfect for giving it a new lease of life, particularly if it goes on sale. We’ll have to wait for real-world benchmarks to see where it fits in an already saturated market, though, as Intel has some tough competition.