Today Intel unveiled eight new 10th Gen mobile CPUs, codename Comet Lake. Rather than depend solely on the 10nm process introduced with its Ice Lake processors last month, the company will be shipping mobile U- and Y-series chips, which it calls “performance powerhouses”, on the long-standing 14nm process node to round out the 10th Gen lineup.

Mobile Comet Lake processors will introduce six cores to the U-series for the first time, and are available with higher single-core boost frequencies than their 10nm peers. The top chip, the Intel Core i7 10710U, is the first to arrive with up to 12 threads of processing power with a max all-core turbo of 3.9GHz and necessitating a TDP between 15W and 25W.

Intel intends these processors for thin and light and 2-in-1 designs, despite the increasing overlap with its Ice Lake CPUs announced earlier in the year. While these processors are incredibly alike on a specs sheet – 10th Gen Ice Lake processors actually necessitate higher TDPs that their 14nm Comet Lake counterparts in some cases – there are a few key differences between 10th Gen chips.

This means that gaming is yet again off the table with Comet Lake, with many of the software improvements Intel is introducing ahead of Intel Xe’s launch unlikely to be available with these particular 10th Gen mobile processors – such as integer scaling. 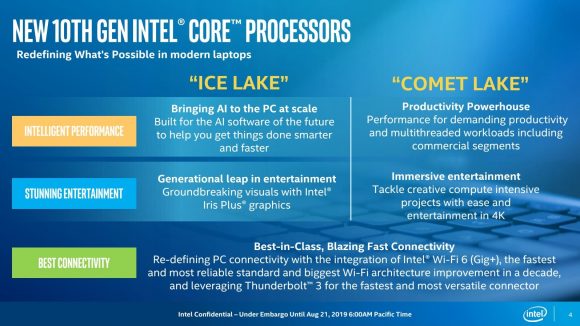 Also introduced with Ice Lake, and since removed with Comet Lake, is the Sunny Cove architecture. Touting an 18% IPC increase and an ingrained AI inference boosting instruction set (DL Boost), 10th Gen Ice Lake CPUs are, at their very core, better than Skylake derivatives such as Comet Lake.

But Ice Lake is not the most convincing use of the node shrink, or new architecture, and chips with a little more oomph beyond 14nm are expected much later once the company has ironed out the creases.

Intel has been engaged in a colossal struggle with its 10nm process for many years, and this first batch of processors is essentially a trial-by-fire for the transistor tech. In Intel’s press materials Comet Lake is described as the “productivity powerhouse”, while Ice Lake is intended to bring “groundbreaking visuals” and “AI to the PC at scale.” A clear distinction in Intel’s eyes, but perhaps a rather transparent attempt to fit a 14nm safety net under its 10nm Ice Lake experiment to everyone else.

At least Intel has found some use for its Ice Lake processors, which will roll out shortly within its partners’ tiny, people-first Project Athena laptops.