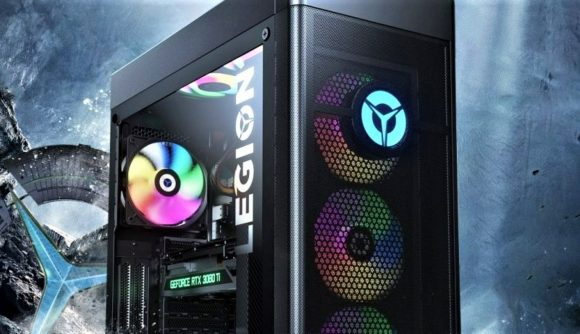 Back in March, Intel’s Rocket Lake line of processors emerged on the scene, armed with the company’s new Iris Xe integrated graphics. Yet, despite its freshness, Intel’s 12th gen CPU range is already scheduled to release this year, and Lenovo’s upcoming Legion 9000K gaming PC will be the first build to wield the Alder Lake chip.

That’s right, while reports hint that Intel’s upcoming Core refresh will be available to preorder from October 27, it’ll also premiere alongside Lenovo’s prebuilt powerhouse. According to ITHome, the Legion 9000K will also feature DDR5 RAM support and PCIe 5.0 SSD compatibility, meaning the rig could sport an Intel Z690 motherboard. Of course, while both Intel’s CPU and Lenovo’s build are PCIe 5.0 ready, we’ll need to wait for products that actually use the interface to hit the market.

Being a gaming PC, the 9000K’s advertising boasts an Nvidia RTX 3080 Ti graphics card, which naturally makes the system a compelling option for anyone struggling with the ongoing GPU shortage. The Legion 9000K should also be available from October 29th, so if your current rig needs more than a GPU upgrade, this PC could be a compelling investment.

Lenovo hasn’t yet revealed the price of its prebuilt PC, but its included specs suggest a premium price tag. However, Lenovo’s comprehensive package could be vastly more affordable than building your own, especially when you consider the fact that gaming pc GPUs are going for 70% more than MSRP. That said, graphics card prices could improve as the year progresses, so you might want to consider holding off until the situation subsides entirely.