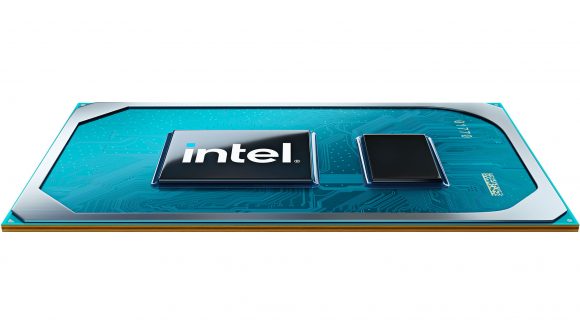 Hot on the heels of Nvidia’s RTX 3050 Ti announcement, Intel unveiled five new high-performance mobile variants of its 11th gen series, codenamed Tiger Lake-H. Just like the desktop chips, these are based on a 10nm process, and come with PCIe 4.0 to support the best SSD for gaming. The i9 11980HK is the most likely candidate for the best gaming laptops out there, looking to give AMD’s top mobile processor a run for its money.

This flagship CPU packs eight cores and 16 threads, along with a base frequency of 2.6GHz and a single core boost of 5GHz. While that’s higher than the 4.6GHz of its rival Ryzen 9 5900HX, it’s got a higher 65W TDP which may result in a hotter running laptop. Brands are pushing unique cooling solutions to mitigate this, however, such as MSI’s Cooler Boost 5 technology in the GE76 and GE66 Raider.

The new Tiger Lake-H series has one big advantage over the Ryzen 5000 mobile series: support for 20 lanes of PCIe 4.0 rather than AMD’s 16 PCIe 3.0 lanes. This isn’t likely to give a noticeable impact on gaming, but could increase performance in applications and speed up file transfers.

Intel’s internal benchmarks pit the i9 11980HK against the Ryzen 9 5900HX, with team blue’s latest helping to boost fps by up to 26%, with an average of a 19.4% performance increase across the seven games. 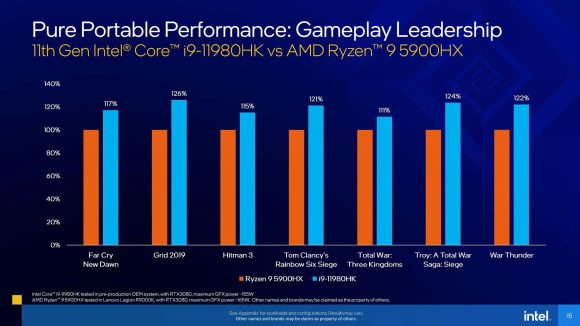 As you’d expect, it outperformed its i9 10980HK predecessor, although gains were smaller here, jumping by up to 21%. 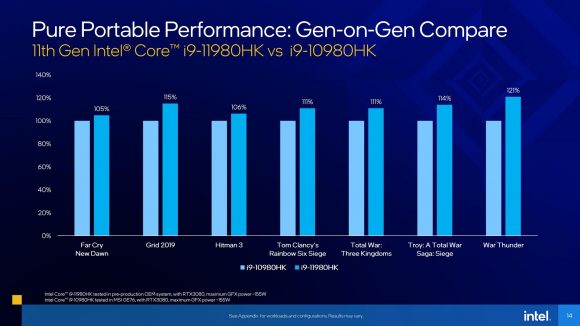 Once these new CPUs are in the hands of reviewers for benchmarking, we will get a better idea of whether Intel’s new Tiger Lake-H lineup is a serious contender against Zen 3 mobile chips. Until then, don’t put too much stock in Intel’s internal numbers.