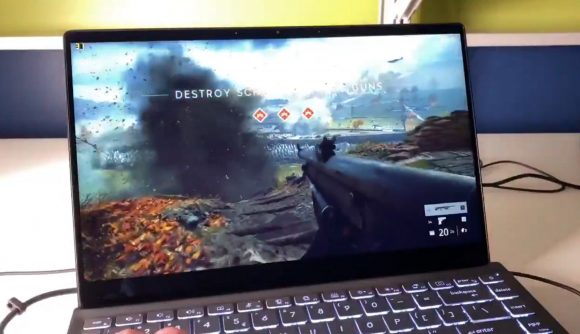 Intel’s upcoming mobile Tiger Lake APUs are expected to debut sometime over the coming months. There’s been a lot of chatter surrounding these APUs in the gaming sphere primarily because they will utilise Intel Xe graphics. And as the Tiger Lake release date draws closer, any performance indicators are likely to be more indicative of final product than those that came before. Based on the latest Tiger Lake demo, there’s good reason to suspect that these APUs will be very capable indeed.

Intel’s Chief Performance Strategist, Ryan Shrout, tweeted (via Wccftech) a video demoing Tiger Lake performance in Battlefield 5, stating “it’s the first time I’ve seen this game run like this on integrated GFX”, and whetting our appetites with a “more later this year!”.

Apart from showing us that the integrated Xe graphics can handle running Battlefield 5, it also shows us exactly how well it runs the game. In the video, the FPS game’s running at 1080p, high settings, DX11, and sits at around 30fps (give or take a couple of frames) for the entirety of the video. This isn’t a benchmark, so we can’t extrapolate too much from these results, but it certainly looks promising.

This is especially true considering the first demonstration of Intel Xe graphics at CES 2020, where the discrete DG1-LP GPU only managed to get 30fps on low settings at 1080p resolution in Warframe. That the integrated graphics of a 10nm Tiger Lake APU is now shown performing better than a discrete Xe GPU performed only a few months ago shows the sort of progress that’s been made with Xe.

Perks of the job! Took a prototype Tiger Lake system for a spin on Battlefield V to stretch its legs. Impressive thin and light gaming perf with Xe graphics! Early drivers/sw, but it’s the first time I’ve seen this game run like this on integrated gfx. More later this year! pic.twitter.com/f1Qlz2jMyB

There’s still room for more progress, too, especially on the software front. Shrout says the Tiger Lake system in question is running on early drivers and software, so we’d expect even better performance upon release. In fact, even after release, we’d expect driver updates to continue rolling out and improving Xe graphics performance. And we don’t even know whether the laptop in the video was sporting the full 96 execution units (EUs) expected at the top end of the lineup.

Achieving 30fps in Battlefield 5 on high settings shows that whether or not upcoming improvements end up being significant, Tiger Lake APUs are shaping up to make for some mean low-power laptops capable of 1080p gaming, especially at low to medium settings.

We already knew that Intel Tiger Lake is likely to double Ice Lake’s frame rates, but now we have an actual gameplay performance video that we can ogle. There’s rumour that discrete Intel Xe GPUs will only be used in laptops, not desktops, but when even Intel Xe’s ‘in progress’ integrated graphics can run games as well as this, there’s still plenty for gamers to be excited about.