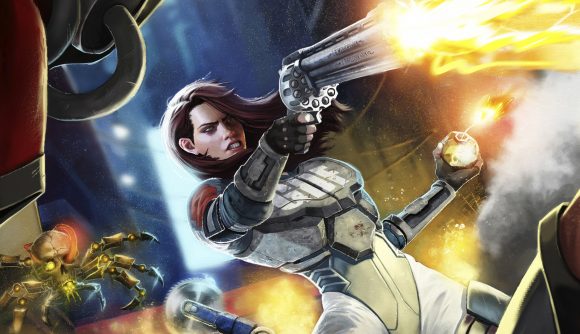 It’s a good time to be an FPS fan, particularly if you prefer retro-style shooters that feel like they were made in the ’90s. Last year’s Quake-like DUSK was one of the best games of the year, the Hexen-like Amid Evil is out now, and 3D Realms actually has two games coming out – the Quake-engine powered Wrath: Aeon of Ruin and the Duke 3D-engine built Ion Maiden. And there’s something big coming for Ion Maiden in less than two weeks.

According to the game’s official Twitter feed, there’s an announcement related to Ion Maiden coming on July 11. “You don’t want to miss this!” it teases. There haven’t been any other announcements hinted at from this Twitter account, so it must be significant – and most likely is the game’s release date.

But could it be the full release of Ion Maiden itself? Frederik Schreiber, VP of 3D Realms, also had a few tweets to share – and he seems to be suggesting that not only is the game “almost done”, but 3D Realms is actually prepping the game for launch.

Schreiber’s most recent tweet promises that the current version of Ion Maiden – which was released on early access over a year ago – comprises less than 10% of the final game, and that it’s “bat shit bonkers”. He also confirms that the game is nearly finished.

We’ve shown you less than 10% of the @Bombshell_Game content, in the Ion Maiden preview campaign and all of the media ever released from the game.

GET F’ING PSYCHED! This game is BAT SHIT BONKERS.
And it’s almost done!

I promise you, you’ve never seen anything like it pic.twitter.com/f5gp97Ltnh

This is supported by an earlier tweet from Schreiber a month ago, where he says that the team are “putting together the launch trailer for Ion Maiden”. If the game’s nearly done and the publisher is readying launch assets, then it’s looking likely that the game will release soon – so July 11 is probably the release date announcement, but may also be the release too. Less than two weeks to go before we find out.

Related: check out the best FPS games on PC

Of course, it may not come out at all if the lawyers of metal band Iron Maiden have their way. Iron Maiden are seeking $2 million in damages from 3D Realms, calling the naming of Ion Maiden “an effort to confuse consumers into believing Defendant’s products and services are somehow affiliated with or approved by Iron Maiden.” 3D Realms responded by saying it will “make any necessary decisions at the appropriate time” – hopefully that time isn’t July 11.