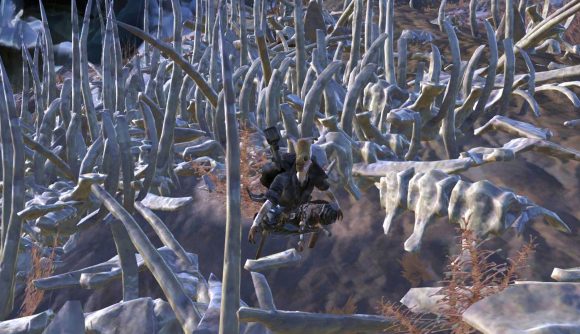 Plenty of games get into the holiday spirit with in-game events, but one we definitely weren’t expecting to join the party was Kenshi. If you’re unfamiliar with Kenshi, it’s a brutally difficult sandbox survival game, where life is hard and then you die. Well, Kenshi is holding an Easter Egg hunt this year, and the winner stands to bring home an exclusive t-shirt.

We need to establish the brutality of Kenshi’s theme in order to convey just how hilarious it is for this particular game to be running a fun Easter event. Kenshi is what you might get if Cormac McCarthy had made World of Warcraft. It’s set in a blasted, post-apocalyptic desert, and you play as a person with no special powers or strengths. The odds are pretty good that you’ll be picked up by slavers and sold to break rocks for the rest of your life, and that’s if the ravenous beak things out in the wilderness don’t get you first.

Appropriately, then, the Kenshi Easter egg hunt is a pretty brutal affair. The task is to start a new game, find three varieties of eggs, and then sell them. The fastest player to do this will win a signed Beak Thing t-shirt, but to qualify, you’ll need to be mindful of the rather strict entry criteria.

First, you must begin the game with the ‘Rock Bottom’ start. This is, believe it or not, an even more extreme version of the ‘deprived’ or ‘wretch’ starts in FromSoft games: in ‘Rock Bottom,’ you not only start out naked and defenceless, you’ve also recently had one of your arms forcibly amputated. Good luck out there!

The ‘Rock Bottom’ start is important enough that the contest organisers have included it in the rules twice, but fortunately, your beginning character is not required to survive the hunt. You can add as many squad members as you want, but you cannot use hired mercenaries to help you find the eggs.

The eggs themselves must be found in nests, and must each come from a different species – so no waltzing up to a shop and buying a few eggs and then pawning them off on someone else.

Once you’ve sold your three eggs, the challenge is complete. Entries must be recorded and uploaded to a publicly accessible video site like YouTube, and the developers stress that timestamps must be included in the description that point to the moments when you find each egg.

The rest of the rules can be found on Steam – best of luck to anyone brave enough to take this one on.