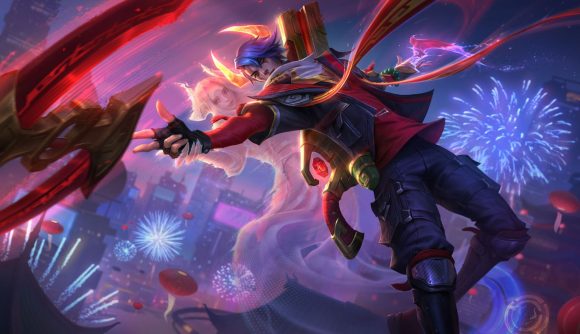 League of Legends’ latest, big ol’ batch of upcoming changes has hit the MOBA game’s testing grounds, and with them are some key updates for marksman champion Aphelios, among plenty others. The changes are, naturally, just tentative for now, but they give us a good flavour of what’s headed the live game’s way, and soon.

If you’ve taken a peek at our League of Legends patch 11.12 notes, you’ll see that there are a pretty significant number of changes headed marksman champ Aphelios’ way when the update drops, which reach across much of his kit. Some of his stats – namely, his attack damage per level and base level magic resist are getting buffed – while his Infernum’s splash damage dealt to minions is getting nerfed, dropping to between 19-25% from 23-30% previously.

Aphelios’ Severum is seeing its heal effect changed a tad, meaning that basic attacks now restore 3-10% damage dealt using the weapon, while abilities will heal 9-30% of damage dealt going forward. Meanwhile, Severum’s number of attacks for Q have dropped, with the modifier going down to per 33% of attack speed from 50% previously, but the damage dealt by the weapon per attack has been buffed a little.

Moonlight Vigil is in for some nerfs with 11.12 from the look of it, though, with the damage dealt by Infernum explosions decreasing to 85% from 90%, and its Crescendum bonus is dropping to four additional mirror Chakrams, where it was five previously.

The team added a few more champs and is finalizing the tuning so a few things may still change. pic.twitter.com/ynMI9ajN0Q

Aphelios’ Crescendum is getting some mixed changes, with the damage dealt per attack getting dialled up, though the starting damage of mirror chakrams is dropping a tad, to 15% attack damage from 24% (though the diminishing threshold for subsequent hits stays the same at 5%).

Aphelios has been a tricky one for the League of Legends folks to balance since he hit the rift in late 2019, with the complexity of his unusual, multi-weapon shifting kit throwing up some unique challenges to getting him perfectly tuned. Lately, his pick-ban rate has dipped pretty low (below 3%), and while these aren’t a set of straight-up buffs for the marksman, hopefully they’ll help get him into a better spot going forward. For the full details on what’s headed the champ’s way very soon, be sure to keep checking back on our patch notes (linked above) over the next week.