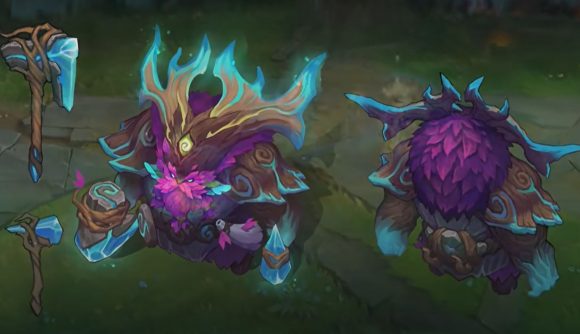 If you tuned into Riot Games’ dev preview of the League of Legends 2020 Champion skins back in January, you might have spotted a snazzy new skin for the multiplayer game’s Fire Below the Mountain – blacksmith Champ, Ornn. Fans wondering when that skin might make an appearance can now rest easy – it’s been announced as a charity skin due to be available soon.

The Elderwood Ornn skin has been announced alongside the League of Legends 2020 All-Star event on the LoL esports site. According to the post, the Champ’s new look will be available to grab from the League shop from December 16 as a charity skin, and it’ll cost 1350 RP. “100% of the proceeds will go towards The Riot Games Social Impact Fund at ImpactAssets” – the company’s “charitable financial partner”, the post announces.

The Elderwood Ornn skin was first revealed in that dev video at the beginning of the year (we’ve included it again for you to check out below), and can be seen at around the 1:35 mark.

There’s no footage or images of the skin in-action just yet, but from the image teased in the January clip we can see a vibrant new fuchsia and aqua-blue look for Ornn, with the ‘wood’ in Elderwood reflected in the Champ’s weapon hilts, headpiece, and armour. Take a look:

If you’re keen to hear more, the good news is Riot says “more info will be released closer to the event”, so hopefully we’ll get to see the skin in-game shortly.

In the meantime, take a look at the League of Legends patch 10.23 notes to get an idea of what’s headed to the live MOBA game very soon.