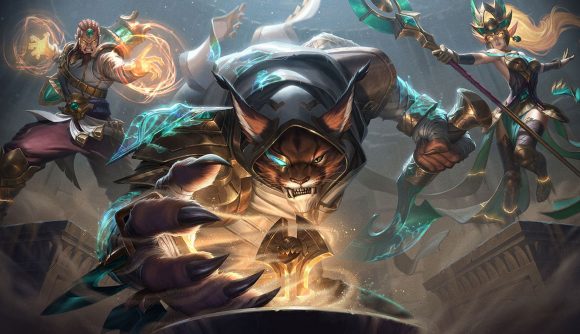 The League of Legends devs will be working hard to bring players even more skins than they did in 2019, Riot has announced. In a new dev video looking ahead to skins and events in League of Legends season 10, the studio reveals it’s aiming to launch around 120 new Champion skins to the game.

As spotted by our sister site The Loadout, lead personalisation producer for League of Legends Jonathan ‘Bellissimoh’ Belliss has shared a roadmap detailing plans for 2020’s LoL skins and events. “In 2018 we shipped just over 80 skins to players. In 2019 we broke the 100 mark. This year we’re trying to push past 120 skins.” Phew.

But that’s not all – Belliss explains that, while Riot has often prioritised giving the most popular Champions new skins due to the sheer number of Champs overall (148 as of this story) making it tricky to cater for all them, “it sucks to have to wait years for a skin for your favourite Champion.” So, a lot of these 120 new skins for 2020 will be for LoL’s more neglected Champs. Sweet.

The dev explains Riot’s goal is to make it so “Champion mains can count the time since they last got a skin in months, instead of years.”

In addition, Belliss talks about the studio’s plans and thoughts on themed LoL events, both in the future and the current, first event of 2020 – Mecha Kingdoms. The skins released as part of this event were for Juggernaut newcomer Sett, as well as Draven, Garen, Jax, and Leona, and arrived with League of Legends patch 10.1.

With news that Volibear players will get a free LoL Champion skin later this year, it looks like we have plenty to look forward to in the way of new looks for our favourite Champs this year.