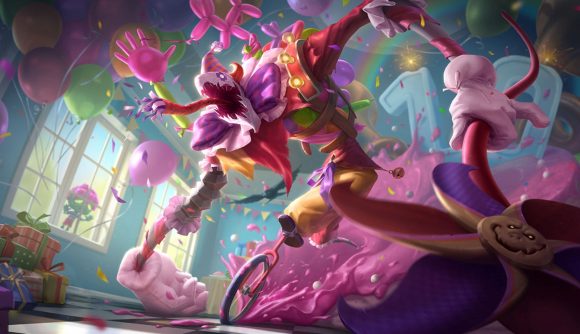 A few League of Legends updates ago, specialist Champ Fiddlesticks, The Ancient Fear, got an extensive rework. LoL patch 10.7 brought an extensive overhaul of Fiddle’s abilities and a full set of changed skins – but now it looks like developer Riot’s testing out even more changes to the ol’ scarecrow – he’s got some buffs in for tinkering on the MOBA game’s PBE.

As reflected in LoL patch 10.10, game designer Blake Smith has posted some details on Twitter of the adjustments. “Testing out some Fiddle changes,” he says. “Could be too much since Fid’s already fairly strong, but I think these might be worth giving something up elsewhere if needed.”

The changes outlined are a set of buffs for Fiddle’s Passive, A Harmless Scarecrow, and W ability, Bountiful Harvest. If the Champ now casts a spell on enemies while he’s pretending to be an effigy – and before he takes damage or is revealed from his disguise – the enemy will now be “feared just as if Fiddle was unseen”.

Plus, he’s now got extra time to set up his scarecrow pose – the time granted has doubled to two seconds from just one second. And, the Champ’s now got a “buff icon to show when the post is active”.

Testing out some Fiddle changes. Could be too much since Fid's already fairly strong, but I think these might be worth giving something up elsewhere if needed. pic.twitter.com/sYjOqOrMK0

As for his W, his minion damage mod has now been decreased to 40% reduction from 60% reduction. It’s worth noting, however, that these are just in for testing – with the patch not due to drop for another couple of weeks, there’s plenty of time for these to be changed further or even reverted, so they might not go live.

In addition to the above buffs, Smith has also said in the tweet’s comments that, if these new changes don’t work out he might add the Champ’s “old MS thing” (movement speed on Passive) “back on”. And, he adds, he “might anyway just because I think it’s good but I don’t want to go too crazy buffing Fid.”

I like the old MS thing too – if this doesn’t work I’ll probably add that back on. I might anyway just because I think it’s good but I don’t want to go too crazy buffing Fid.

Guess we’ll have to wait and see what happens when May 13 rolls around and the tenth big update of the year goes live. Keep an eye on the LoL patch 10.10 notes for other upcoming adjustments in the meantime, and also go get a look at our LoL tier list to see which the best League of Legends Champions are for each role right now.