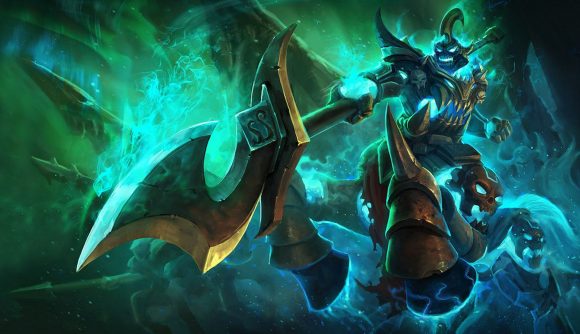 It looks like League of Legends champion Hecarim is in for some visual effects tweaks in one of the multiplayer game’s upcoming patches. As spotted on the League subreddit, VFX artist Jason ‘Riot Lanky Tree’ Chisolm has posted a snapshot of a “spooky new look” headed The Shadow of War’s way, with the changes due to hit the PBE “soon”.

“Spooky horse with a fresh new spooky look should hitting PBE soon,” the dev announces on Twitter, with new features listed as: “Hoof prints on all skins” and “an actual fire tail” – which means “no more solid shape!” – as well as “cleaner arcade visuals”, and “further enhanced thematic elements on Elderwood and other skins”. So, good news if you’re a Hecarim main – and there are some visuals to give you an idea of these changes in action, too, which you can check out in the tweet below.

It’s not clear which patch the update will hit the PBE with, though. We know it very likely won’t be League of Legends patch 11.4, given that’s due to drop tomorrow, so has already done its time on the testing grounds.

Whether we’ll see the update hit the PBE for patch 11.5, however, we might well find out later this week when the new update drops for its fortnight of tinkering. Either way, we’ll have the notes up for you to check out when the changes arrive, so keep checking back on the site.

In the meantime, dream of a dazzling new Hecarim and take a look at our rundown of the best MOBA games on PC if you’re a League fan and keen to see what else is out there in the space.