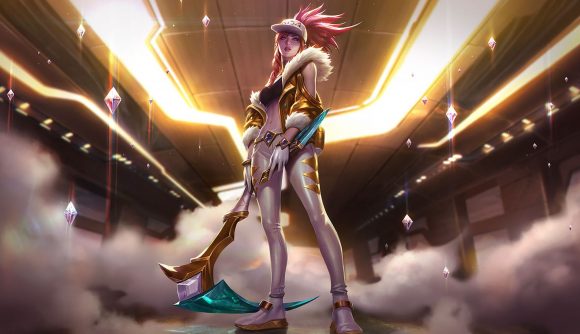 That’s according to LoL statistics sites GoL.gg and Gamepedia (via our sister site The Loadout), which show the Akali LCS and LEC ban rate has hit the 100% mark in both of the spring season tournaments, as of this story. And it seems this is becoming a bit of a recurring pattern, with the assassin Champ having scored the number three spot in the list of the LoL Worlds 2019’s most-banned. Her ban rate there was just under 60%.

Similarly, in the China-based tournament League of Legends Pro League, Akali is again the assassin with no master – almost. She’s earned a 97% ban rate across 35 matches played so far (again, at the time of writing), dodging a ban in just a single one of those. In that game, Invictus Gaming scored a victory against Dominus Esports, who had selected the Champ as its first choice for the game.

Topically, Akali is seeing some pretty big changes in the upcoming LoL patch 10.3. Her W ability Twilight Shroud has a tooltip update, so now, if she’s immobilised while hidden in the shroud, she’ll be revealed for the whole time the effect’s in play. Plus, the ability’s movement speed has been changed and her R (Perfect Execution) and Q (Five Point Strike) are also getting some changes that could see her ban rate drop in future tournaments.

If you’re keen to keep up to date with the latest version of the game, check out the League of Legends patch 10.2 notes, but there’s plenty to look forward to when LoL patch 10.3 arrives next week – there are some super sweet new skins on the way and it looks like that Wukong rework might at last head to the live game, too.