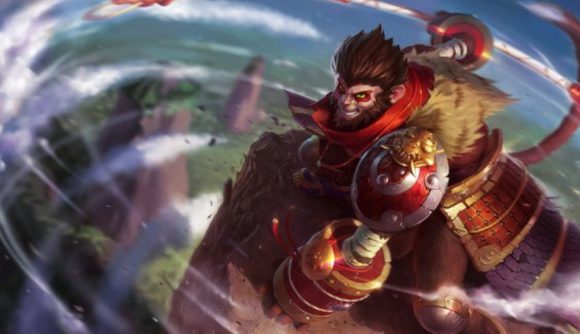 If you’ve been keeping up with the latest changes headed to Riot’s flagship MOBA in LoL patch 10.5 you might have noticed extensive changes for Wukong have appeared on the game’s PBE again. The Monkey King has popped up for tinkering in the last few patch cycles, but changes have been reverted each time, and the rework hasn’t yet gone live. This time, however, there’s a hefty range of tweaks up for testing – and it’s possible the rework could at last go live “soon”.

Following the tests and a bunch of updates about the rework on Twitter, lead gameplay designer Mark Yetter recently tweeted: “Wukong update: re-focusing the goals and [senior Champion designer August Browning] is picking up the work to get it shipped in a patch soon”, adding: “We think there’s a lot of value getting him back top/jungle where more players want him”.

You can see what Riot’s planned in the latest patch notes – and it’s a lot. As well as adjustments to his stats, like decreases to his mana, base HP, MP5 (mana regeneration per 5 seconds), and base MR, his Passive ability, Stone Skin, has seen quite an overhaul.

Its magic resistance effect has now been removed and it’s got something new instead: granting the diver Champ 1% maximum health regeneration per five seconds. Plus, its armour and regeneration bonuses are now quadrupled when there are three (or more) enemy Champions lurking about nearby, and the frequency of enemy checks has gone up to every 0.25 seconds from one second.

His Q – at one point in the testing re-named Wuju Strike but then changed back to Crushing Blow – has greater scope for bonus damage, bonus range, and a longer duration for armour shred. Plus, each time Wukong or his clone deal damage with basic attacks and spells, Q’s cooldown reduces by half a second (but the Q cooldown is overall increased).

Wukong update: re-focusing the goals and @RiotAugust is picking up the work to get it shipped in a patch soon

We think there's a lot of value getting him back top/jungle where more players want him pic.twitter.com/rPI6pdur6i

Wukong’s W ability, Warrior Trickster, now lets him dash (with a range of 300), and is effective over small walls. The duration of stealth is up by half a second, but Wukong’s W no longer deals AoE damage upon despawning, and the cooldown has been increased.

Also, based on other high priority VGU projects getting the focus of our art resources, we're wanting to ship changes without much visual change so that we can get the new gameplay out there

Last up, Wukong’s R skill, Cyclone, now allows a second cast within a seven second timeframe, but it won’t ‘knock up’ enemies already hit by the initial attack, and the duration of the spin attack has been doubled to four seconds. Movespeed while using R has changed to [20/30/40% based on skill rank] from [5-40% based on time], and the spinning attack range has been shrunk down to 50 from 175. It’s also now got a new buff timer added to the spell icon, so now you’ll know how much spinning time Wukong’s got left.

If you’re keen to see the current Wukong changes being tested in full, head over to the LoL patch 10.5 notes.

While it’s not confirmed the rework will arrive with the next update, which goes live on March 4 according to the 2020 League of Legends patch schedule, Yetter’s announcement that it should be “soon” indicates it won’t be long before Wukong’s overhaul makes the leap to the live game.