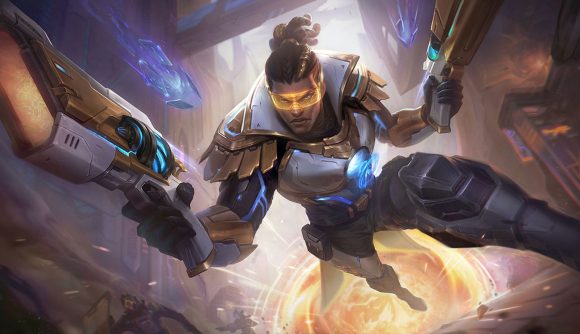 One of the lead devs at League of Legends developer Riot Games has just unveiled a bunch of changes headed the MOBA game’s way with its next major update. With some hearty changes to Lucian’s power and various mage champions, the Tahm Kench mini-rework, and more coming, it looks like League of Legends patch 11.13 is set to bring “the biggest meta shake-up we’ll see for quite a while”.

That’s according to lead game designer on the Summoner’s Rift team Jeevun Sidhu, who has posted a series of tweets giving us an idea of the patch’s scope. “My hopes are high that 11.13 will be a very big patch,” the dev says. “Between the Tahm Kench update, new top lane items, mage buffs, and major mobility tweaks, this will probably be the biggest meta shake-up we’ll see for quite a while. Very excited to see how it turns out!”

These changes include some big ol’ tweaks for marksman champ Lucian, who is really shining in pro play at the moment, being a bit of a reliable favourite for mid-laners who also boasts a degree of versatility, as he’s pretty well suited to the bot and top lanes, too, as Sidhu explains. However, out of pro play, he’s been a little less dominant of late, with a “very low” win rate in solo queue across all roles.

To counter this, the dev reveals that the studio’s looking to get Lucian focussed back towards the bottom lane. “Currently we’re testing reduced base stats and some nerfs to his early abilities,” the dev explains – but, to keep things even, he does get some new power buffs, too, when he’s healed or getting shielded by an ally. The team’s also testing some changes that would see him deal extra damage against immobilised targets.

Clarifying these points, Sidhu adds: “We believe ‘high agency’ is a core element of Lucian’s identity, and our changes are mindful of that”. As ever, though, these are all just tentative changes for now, so it’s not guaranteed they’ll hit live servers.

Elsewhere, some of the game’s mages are seeing some tweaks, with Ability Power Mana Mythics’ costs going down by 200 gold. Sidhu says he’s aware this won’t fully solve some gripes players have had of late with power level and satisfaction over mage champs, but reassures that the team will keep a weather eye on this.

So, with the Tahm Kench mini-rework, the usual raft of champion and item changes, and – of course – the new skins we’ll see come with the next major update on top of these new changes, it looks like we can expect 11.13 to be a right chonker. Catch our notes linked in the intro above for the full rundown of what’s on the PBE right now if you’re curious to know more before it all lands with a bang on live next week.