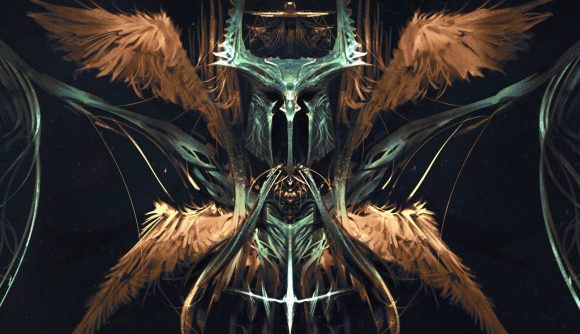 The day is fast approaching for League of Legends band Pentakill’s return. After four years away, the rock group – made up of League of Legends champions Karthus, Kayle, Mordekaiser, Sona, and Yorick – is making a comeback in September with its third album Lost Chapter, which Riot Games’ music label has just unveiled on Twitter.

“Legends have returned,” the reveal tweet announces (below), giving the new Pentakill album’s release date as September 8 – so just a couple weeks away now. Aside from some new, suitably metal, album artwork, there’s little else to go on right now in terms of track listing or other details, though some comments from Riot Games creative director Christian ‘Praeco’ Linke last year could offer a few clues. In March last year, Linke confirmed that a new Pentakill album coming up would feature original music – “at least a handful, up to ten or so”.

The dev also gave us an idea of the flavour of the music, saying at the time that he thought the studio would want to “make sure we capture the essence of Pentakill and keep things melodic and accessible” and with “strong melodies is always at the core”, as well as “add something new to it”.

Additionally, he said that “on this next one we would likely try to add some new talent to the group”, so it’s possible we could see some at least one new champion join the gang for this album. Some fans have suggested that the new album artwork seems to bear a resemblance to Viego’s crown, so perhaps we could see the Ruined King himself join the ranks of Pentakill – though this is far from confirmed at this point.

Riot Games Music’s Twitter banner has also been updated with some new artwork, which appears to show the line-up in some new styles. Whether this is a potential hint at some new skins coming up for the band is unclear right now, though it does seem likely given new skin lines have been rolled out in the past for LoL groups’ new albums. For example, K/DA got some shiny new All/Out skins last year to mark the band’s new album, and the arrival of newcomer, Seraphine. Again, though, this is just guesswork for now.

Pentakill’s new album Lost Chapter drops on September 8. If you’re keen to see what’s headed to League of Legends itself before then, though, be sure to check out our League of Legends patch 11.17 notes and keep a weather eye out for the 11.18 notes on our site, which we’ll post when the new update comes to the game’s public testing servers.