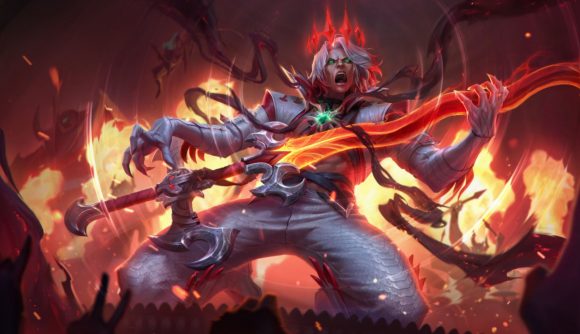 Just a handful of hours ago, I was musing on whether some artwork clues meant League of Legends champion Viego would be joining the game’s metal band Pentakill for its new album, and if some new skins for the group’s line-up would follow. Well, it now turns out those things are both indeed true: Riot Games has just revealed that the Ruined King is making his debut in the band, and a bunch of new splash art and gameplay of the new skins has just hit social media.

The reveals come from the UK, IE, and Nordics League of Legends Twitter channel, which has shared all the new splash art – including for Pentakill’s newest member – and some PBE preview shots giving us a flavour of the new-look styles in action. You can check these out below, with Viego’s Pentakill skin looking just the part, with the dastardly champ shredding his signature – though distinctly more rock-style – sword like a guitar and sporting a glowing red crown. Oh, and one heck of a stage presence, with that expression and flames all around.

Likewise, our original line-up members Yorick, Kayle, Olaf, Mordekaiser, Karthus, and Sona get some scorching new looks, so good news if you main any of these champs.

Here are the reveals from Riot on Twitter (there are a fair few!). First up, we’ve got the splash art:

Here are some PBE preview from Riot of the skins in action:

Here’s a cinematic giving us a flavour of the new content:

Pentakill – conquerors of a land of myth and metal, where dark gods of music have toyed with the fates of mortal bands for millennia. Now the dominant sound of this world, Pentakill’s story is about to enter a new chapter…#LegendOfPENTAKILL pic.twitter.com/Z9qNChTy6X

We can expect the new League of Legends Pentakill skins to drop with patch 11.18, which will hit the PBE for a fortnight of testing tomorrow. Keep an eye on our site, as we’ll have the notes up when it does arrive – and, for now, do check out our League of Legends patch 11.17 notes to see what’s dropping imminently.