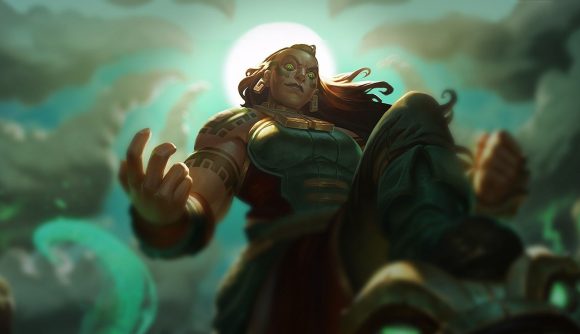 Plenty of League of Legends’ champions have been given the summer-ready treatment with Pool Party skins – the MOBA game’s alternate universe that’s all about sunshine, swimsuits, and the occasional semi-seasonal in-game event. One champion – The Kraken Priestess, Illaoi – hasn’t got a Pool Party skin as yet, but one talented fan has created their own concept, and it looks like the real deal.

“I think Illaoi deserves more love so here I am giving her more love and attention that she deserves,” League of Legends fan Significant-Trust-10 posts on Reddit, with their two-part Pool Party Illaoi concept. As you can see below, the splash art shows the fighter champ emerging from the waves with a giant flamingo rubber ring clutched under her arm, tropical flowers in her abundant hair, and – of course – a giant tentacle poking out of the sea behind her. This one looks a little friendlier than the spooky sea beasties she’s used to summoning on the Rift, though.

While it’s not a setting like those we’ve seen the intimidating champ in before, Illaoi’s instantly recognisable in the splash art, with her outfit following the silhouette she usually sports across her different skins, and she looks just as powerful as ever.

The art style of the splash is incredibly faithful to the one Riot usually uses for its official Pool Party skins, and it gives us a really great idea of what a Pool Party Illaoi could be. Take a look below:

Be sure to check out our League of Legends patch 11.14 notes for the full rundown of what’s getting tested on the PBE ahead of the game’s next major update, as well as our sister site The Loadout’s League of Legends ranks guide for some pointers on how to work your way up those ladders.