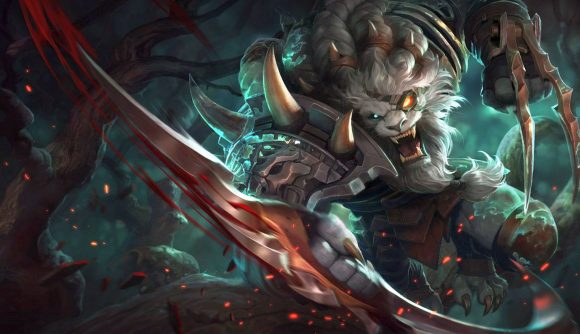 League of Legends patch 11.17 is up on the MOBA game’s Public Beta Environment for a fortnight-long round of testing, and with it comes a batch of key balance changes for assassin champion Rengar. Summoner’s Rift team designer RiotPhlox has posted details of the devs’ aims with these, revealing that they’re looking to “ease pain points and open up Rengar jungle so that he’s not so inaccessible in lower ELOs”.

RiotPhlox notes that the team’s aware of player feedback on “how Rengar could feel a lot better” – so, they’re bringing in some key changes across three of the champ’s abilities for fans to test. First up, the devs have removed some little tricks Rengar had up his sleeve, for example by taking away the ability to create a bonus stack through a jump if at zero, but have applied a bunch of buffs across his Passive, W, and E.

For the first – Rengar’s Passive, Unseen Predator – Riot’s dialled down his maximum Ferocity stacks a little, but his move speed buff from the ability’s Empowered effect has been increased, the falloff time of his passive’s Ferocity has increased, and his Bonetooth forgiveness timer has gone up, too.

Elsewhere, Rengar’s W, Battle Roar, has been updated. The tweaked ability will now grant him some bonus magic resistance and armour, though it will no longer cleanse him of crowd control when he’s Empowered. As for the champ’s E, Bola Strike, the devs have added two new features: there’s now no cast time when Regnar’s leaping, and it’ll reveal enemies for two seconds.

This changelist isn't locked and doesn't have set date to ship. Numbers are also a bit wip. We want to make sure Rengar is moving in a direction that we're all happy with.

These will be on PBE Monday! (probably)

In the replies to RiotPhlox’s tweet detailing the planned changes, the dev indicates the team could additionally fold in a boost to the champ’s ultimate to make it work a little more like Twitch’s Q – so, giving players more of a chance to channel abilities earlier on before having to come out of stealth. This is far from confirmed as a coming change, but the dev notes the team “will look into it” after a fan’s suggestion.

It’s worth noting that this change list isn’t locked down and “doesn’t have [a] set date to ship”, so it’s possible it might not arrive when the 11.17 patch goes live next week. But, most of these changes are available to try out on the PBE right now if you’re keen to give them a whirl.