Initially, you should know Legends of Runeterra yes, yet another collectible card game. And as with most popular card games, you can only play with cards that you have collected over your time playing against real opponents or AI. To collect cards, there is an in game rewards system granting you blind card packs with experience. You’ll also have the opportunity to purchase ‘wildcards’ which can be exchanged for the Legends of Runeterra cards you really want.

To play cards, you’re going to need mana first. Each turn you have an amount of mana to spend. On your first turn it’s one mana, but this increases with each turn, up to ten mana. This is very similar to Hearthstone, until you get to the new concept of unspent mana. At the end of your turn if you have any unspent mana, because for example you had no cards you could play, up to three mana will be saved for spells. This will be stored until you use it, so there is no pressure to spend it right away. 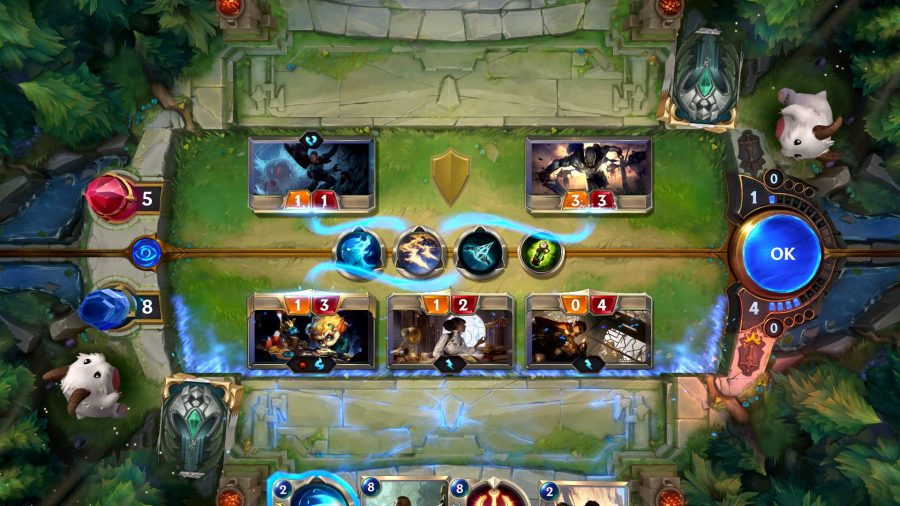 In a regular card game you might expect to perform an action, and then the opponent to do so too, and both moves make up a ‘round’. In Legends of Runeterra there is a little more back and forth than you might expect.

A very basic round in Legends of Runeterra may go something along the lines of this description. The round begins and the first player has the opportunity to play a card. If you do, it sits in play where both you and your opponent can see it. You opponent then gets the same opportunity before handing the turn back to you. You can then action your card, for example, positioning it to attack or defend. If you are to attack, your opponent can place a unit opposite to defend if they so choose to. Attacks, defending, or other actions then happen and that’s the end of the turn.

As previously mentioned, cards will be able to defend or attack other cards, as well as attacking the opposing player. On the card, you can see that there are different values in several places. The number on the top left of the card is its mana value, or how much it will cost you to play. The number on the bottom left is its attack value, and the number on the right is its health. No matter if you are attacking or defending, the attack value on the cards will affect the other cards health, so if your three attack, three defence card attacks a blocking card with the same stats, they would both perish. Terms and conditions apply.

Like Hearthstone, damage done will stay, however it’s more like Magic the Gathering: Arena when it comes to blocking attacks with specified cards. The difference is in Legends of Runeterra you can only block an action with one card, however card effects like being ‘elusive’ will render blocking useless.

Other values you may see on the card will be specific to that card individually when they are played, or killed, so it’s important to pay attention to effects. 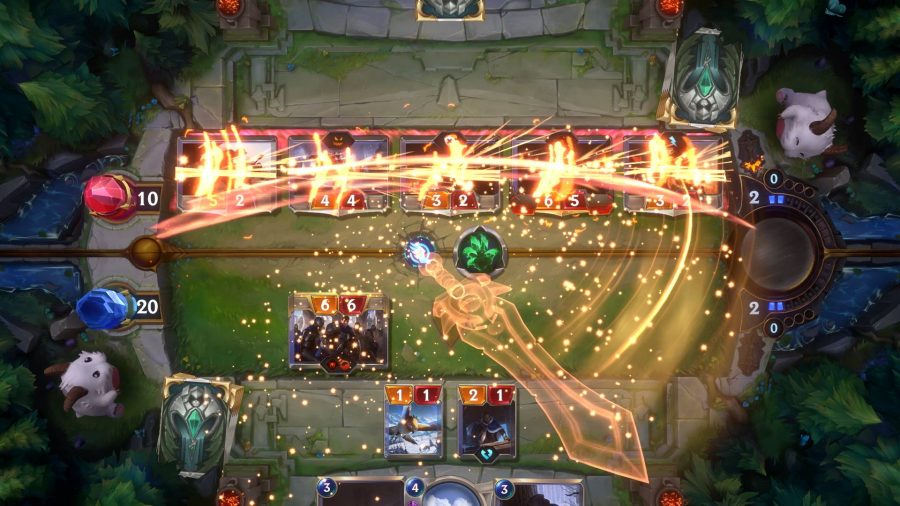 To win a game of Runeterra you must get your opponent’s health to zero. Each player will start out with 20 health, which can be replenished if you have the cards to do so, such as restore health cards.

In Legends of Runeterra, you are allowed 40 cards in your deck, with up to six champions, and a cap of three duplicates of a card. There are six Legends of Runeterra regions which represent classes. Regions have specific themes and abilities special to them. In any deck you are only allowed cards from two regions at a time.