The original G502 gaming mouse was released almost five years ago now. In tech years that makes it practically a pensioner. But it’s a much-loved pensioner and one that can still go toe-to-toe with the best of the digital rodents released into the market. It has always remained a resolutely wired mouse, however, even once it was updated with Logitech’s in-house Hero sensor.

And that’s been an issue for many people. Indeed Logitech, and even its external agency people, tell me for every research event, social, or forum posting the company puts out there will always be at least one person responding with the same question. When are you going to release a wireless version of the G502? And that’s whether they’re researching VR, gaming, or smart home stuff.

The G502 is, apparently, the best-selling gaming mouse on the planet – potentially thanks to the intervening years making its original high price tag now far lower – and it would seem like a no-brainer to simply drop a wireless sensor into place and ship it out into the wild. But these things, they are not so simple to do, in fact Logitech’s principal optical engineer explained the G502 Lightspeed to me as a “mechanical miracle.”

The problem is that, despite being the most popular mouse since Danger, the G502 was also one which spawned its own meme culture, mostly surrounding the weight of the design. At around 120g, not including the cable, the G502 wasn’t exactly a heifer, but it was still seen as a heavy mouse, a ‘brick’ if you will.

Rat race: These are the best gaming mice around today

And when you come to making an existing design wireless you’ve got to add in a second sensor to cope with the wireless communication as well as a battery, and that’s only going to add to the weight. Which is something Logitech really didn’t want to do, but thankfully the company has been working to create a set of mouse technologies – such as the Hero sensor and the Lightspeed wireless tech – that have now made it possible to create a wireless version of the G502… and crucially make one that’s actually lighter too.

The project as a whole has been worked on for years, with different advances making the creation of the G502 Lightspeed ever more possible. And the excellent Logitech G Pro Wireless seems to have been the final proving ground for pretty much all of them. 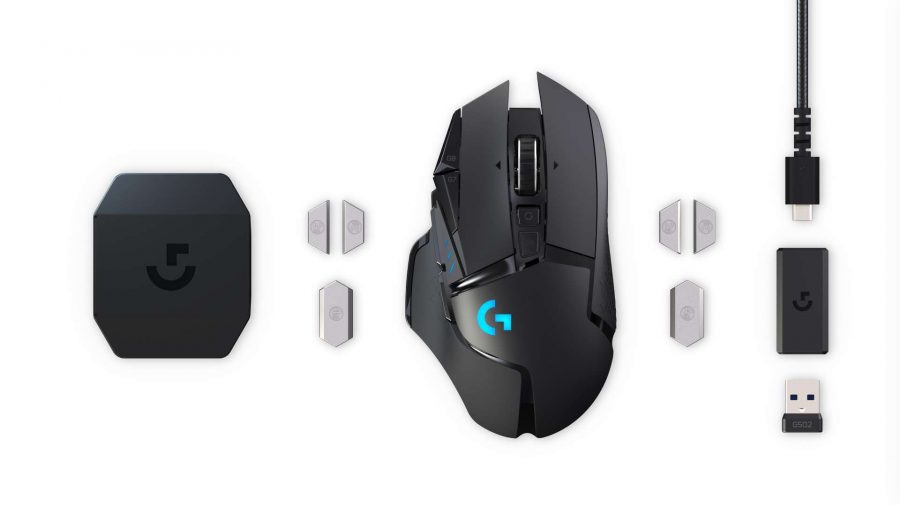 It’s the Hero 16K sensor used in the Pro Wireless which has allowed Logitech’s engineers to fit the G502 out with a battery a fraction of the size of the one which gives the G900 the longevity it currently enjoys. And to do so while still increasing that battery life. The G502 is knocking around 48 hours with the default lighting mode – where the G900 started out at around 30 hours – and up to 60 hours with the RGB LEDs deactivated.

But no-one’s going to deactivate the pretty lights, obviously.

Then the Lightspeed wireless technology has proven itself as a connection that’s every inch as good as a regular wired connection, with the fact professional gamers are trusting Logitech when it matters most in-game breeding confidence among the rest of us.

But it’s the thinwall endo-skeleton technology the company introduced with the super-lightweight Pro Wireless which has allowed Logitech to give its community the mouse they wanted.

“We started by listening to G502 users,” Chris Pate, Logitech portfolio manager, told me recently, “and they had a very straightforward request, what they wanted was a G502. Exactly. But with all the latest technology.” 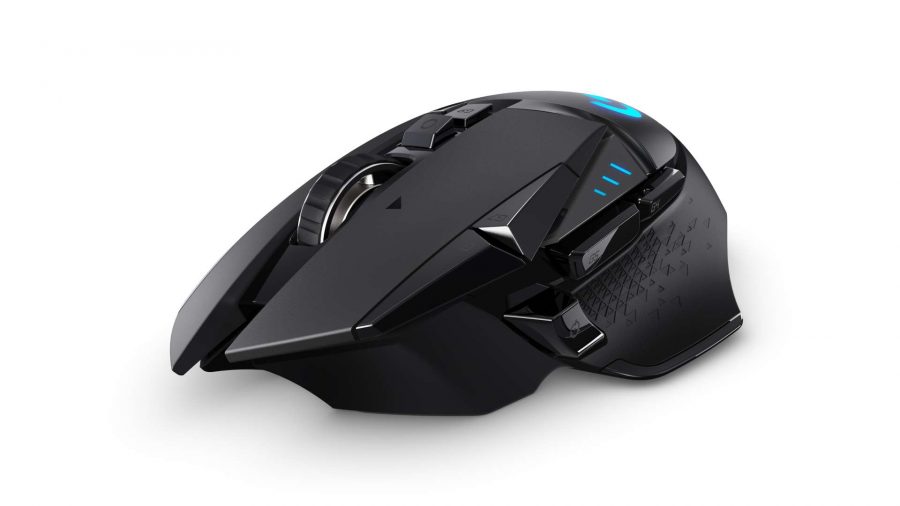 Only a couple of the mouse’s feet have escaped complete redesign, though they’re actually the only place I have a concern with the newly made rodent. Depending on your mouse surface they can feel a touch rough. With my office mat they glide pretty smoothly, yet on my home pad it sometimes feels like it’s dragging its heels.

It hasn’t made a difference to the pinpoint accuracy of the G502, but does make for an unpleasant sound as you’re scraping your mouse around in the heat of battle.

But Logitech has still managed to keep the outside of G502 looking every bit like the original Proteus Spectrum, except without the stupid name, and with a completely redesigned inside. The feel is only slightly different too, but for the better. The actual button presses seem more definite than before, especially on the extra programmable buttons. 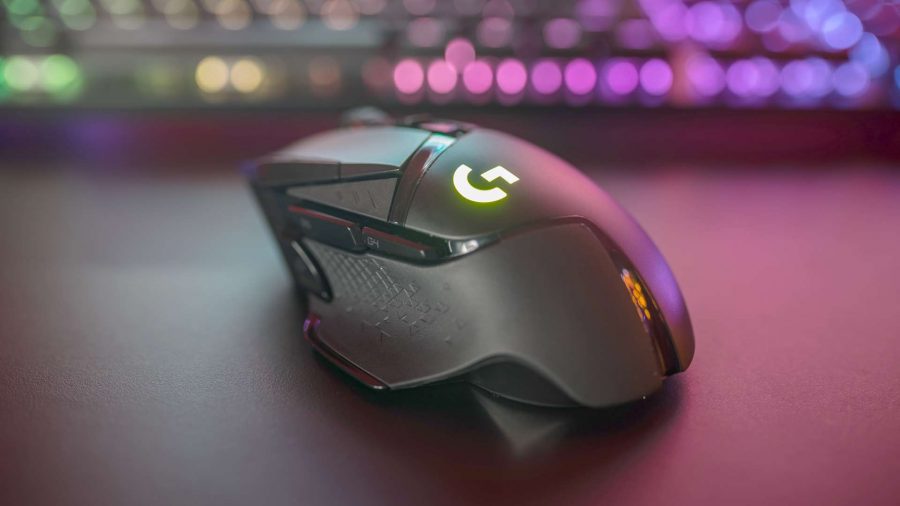 There are a few tiny design changes on the outside, to help fit the USB charging port and the PowerPlay puck in the underside, but you’d be hard pushed to spot them at a glance.

And yet it does have all the latest mouse tech inside it, offering the same 16,000DPI as the more-recent wired G502 Hero update, albeit with a less power-hungry version of the sensor, and that two-day Lightspeed wireless battery life.

So, how does it stack up against the G Pro Wireless, our current pick for the best gaming mouse around today? Well, that’s a toughie; they’re almost different mice for different gamers. In terms of the basic tech, they’re more or less identical, though the Pro is much lighter. Which means it comes down to your aesthetic preference as well as just how much you need a few extra buttons.

They’re also the same price at $150 (£130)… making them both gratingly expensive for a mouse. Sure, the wireless technology is unsurpassed, but that’s a lot of money to spend on a rodent, gaming, wireless, or whatever. And if you were to factor in the optional PowerPlay wireless charging package too, you’re looking at a $250 gaming mouse, and that’s just unconscionably pricey. 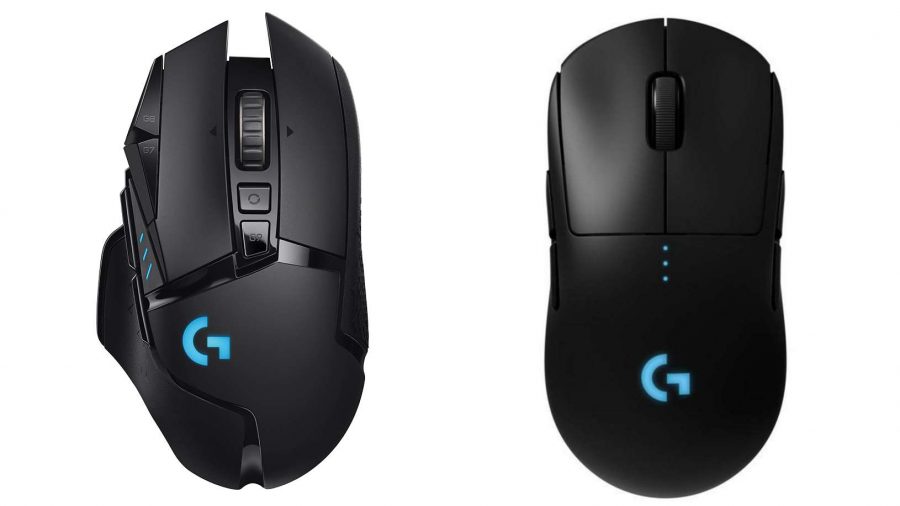 The G502 has a much more ‘gamer’ aesthetic, all angles and focused right-handed design notes. But it also comes with more programmable buttons as well as an FPS must-have, the sniper button. The G Pro has a far cleaner, more simple, ambidextrous design, and I have to admit I’m far more drawn to that look.

“I think the pro-aesthetic is a little bit more restrained,” says Pate, “and I think that shows in the Pro Wireless mouse, but our goal is not to have a particular signature design language. Everything needs to look like it came to come from a similar family, but we’re going to continue to make gear for as wide of a range of gamers as we can. No one product, not even the G502, can be for everybody.”

But there is one deal-breaker of a feature the G Pro doesn’t have, and that’s the glorious infinite free-wheeling scrollwheel. I’ve been obsessed with it since I first laid fingers on the Logitech G9, my favourite mouse of all time, and that’s going to have me keeping the impressive G502 Lightspeed close to my side. Though if the G Pro had the same wheel, it would be my pick, after all, its clean, restrained aesthetic is much more my jam.

It’s a great mouse - as the G502 Proteus Spectrum was before it - but with the Lightspeed tech backing up the Hero 16K sensor, and optional PowerPlay wireless charging, the new G502 is almost the complete package.