One of the big challenges of running a Dungeons & Dragons campaign is figuring out how much you need to push back against your players. How hard should each encounter be? How many hobgoblins do you need to position outside the village to make the encounter feel dangerous, without punishing your friends? In Loop Hero, those are the kinds of decisions you’ll make as you watch your little pixel protagonist walk a lonely trail, suspended in the inky black remains of a destroyed universe.

Each run in Loop hero begins at a campfire set on a desolate loop of road, and your hero begins each journey with nothing. Each time you slay a beast or monster on the path, you have a chance to pick up cards or gear. Gear can be equipped, conferring stat bonuses like attack speed and evasion, while cards are used to add complexity to the circuit itself, adding new monster spawners and passive buffs.

Cards come in two main varieties. Terrain cards, like mountains and deserts, add incremental bonuses to your run – mountains boost your defence, while each desert tile subtracts a percentage point from your enemy’s health. These can synergise in surprising ways, and finding these interactions is one of the early delights of Loop Hero.

The other card type alters the loop itself, either with cards that change sections of the barren wasteland into something like a swamp or village, or by adding some structure to the side of the road. These can be anything from lighthouses, which increase attack speed for you and your enemies, to creepy mansions that spawn vampires – each has some effect on the difficulty of your run. 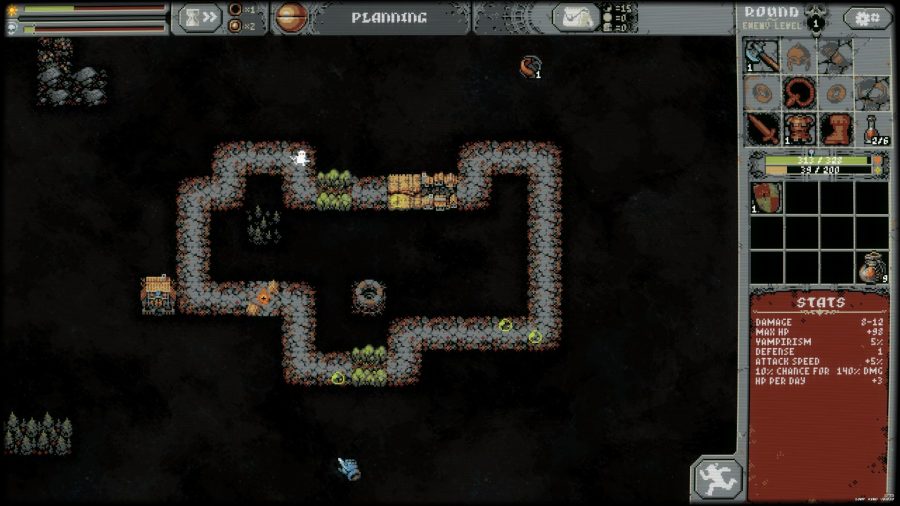 As a sort of dungeon master, your job is to manage the difficulty level of the hero’s journey. You want to encounter as many enemies as you can without getting your explorer killed, and just like in blackjack, the closer you come to failure, the better the rewards. Enemies grow stronger with each circuit, so your only chance to scale with them is by earning better loot.

just like in blackjack, the closer you come to failure, the better the rewards

If you miscalculate, you still have a couple of options. You can retreat from wherever you are on the track, keeping 60% of the resources you’ve gathered along with your cards and gear. If you wait until you’ve completed a loop and arrive back at your campfire, you’ll be able to keep it all. Even if you die you still keep 30% of the materials you’ve picked up during your trip, which you can use back at your camp to construct structures that unlock new heroes, cards, and passive buffs.

The heroes each have their own interesting quirks and unique gear. The rogue collects trophies rather than equipment, which are then exchanged for loot each time you complete a circuit. The necromancer raises skeletons to do the actual fighting, and the equipment you pick will determine how effective they are in combat. 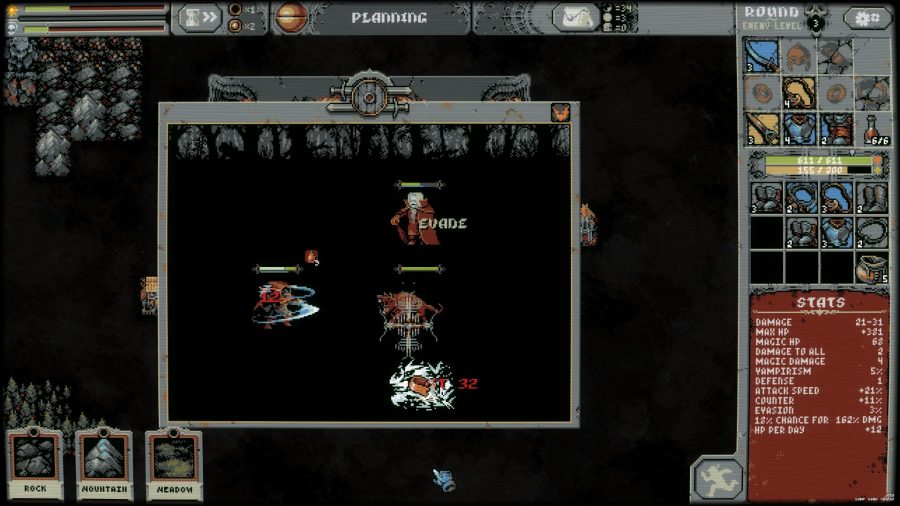 The retro, Amiga-style visuals belie a game that borrows from an impressive array of genres. Loop Hero is an RPG that involves fighting monsters as different character classes, selecting level-up bonuses, and equipping gear looted from fallen enemies. It’s a deck-building card game in which you build each run with tiles you unlock. There’s a base-building component that helps fill out the story and provides new tools and bonuses for your expeditions.

Loop Hero keeps me involved by pressuring me to plan ahead

Loop Hero also cribs from casual and mobile games like autobattlers where it sees fit. You watch as your character automatically treks around the loop, only pausing the action to equip new items, place increasingly challenging obstacles for your hero, and shape the terrain around the circuit.

There’s a story, too. A malevolent Lich has cast all of existence into oblivion, and our hero awakens in a strange state of stasis. Time is meaningless and loops around itself – nothing is permanent, everything repeats endlessly. Only by remembering the world as it was can our hero hope to restore existence itself, and so you set out to put things back together, one step at a time. 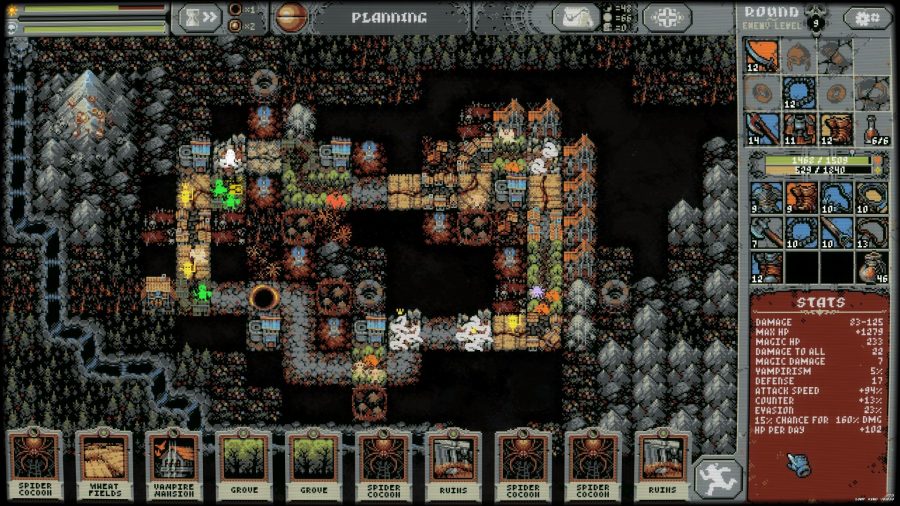 Loop Hero imposes card count limits, forcing you to carefully consider which buffs and enemies you want to keep in rotation, and which to discard with each new lap. Spider nests are good for farming experience, but their numbers can get overwhelming in later loops. You could drop them in favour of keeping a vampire mansion in play, which adds formidable vampires to other encounters, but doesn’t spawn any monsters on its own. The best call depends entirely on how your hero is progressing: one tough enemy like a vampire could prove too much if your damage output is low, whereas a hard-hitting hero might not be able to strike fast enough to deal with several smaller mobs at once.

Loop Hero’s first few chapters ramp the difficulty up gradually, introducing you to new enemy abilities and bosses, but not overwhelming you with new considerations. Chapter four raises the stakes considerably, and you’ll suddenly find yourself reckoning with the game’s clock – each tile you place advances the timer, and once it hits a certain threshold, you’ll face a powerful boss that will wipe the floor with your hero if they’re not ready.

For every issue that crops up as I play, Loop Hero has an answer. When I grow weary of the slow pace, I use the button that doubles the game speed. When the resource grind begins to grate on my nerves, a new chapter unlocks that boosts my earnings. Conversations with new NPCs or enemies on the road keep me interested in the desolate world, and each new tile synergy excites by hinting at new foes or terrain possibilities. 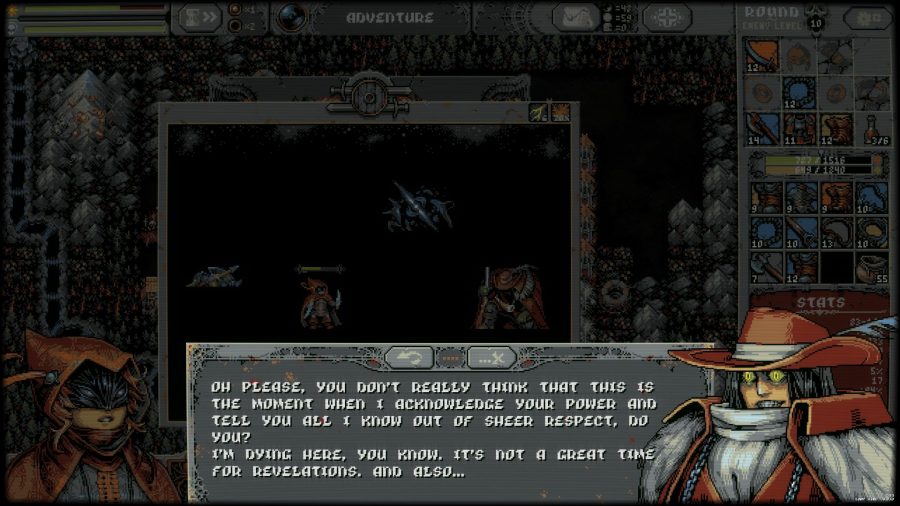 It’s difficult to get upset about pacing when a game gives you this much control over that exact element. You make small adjustments that aggregate over the course of each run, and when one goes badly, it’s usually pretty clear that you’ve made too drastic a change to your deck, or gone a little overboard with a particular type of terrain. Even what I thought would be my main complaint – that there’s not enough of Loop Hero to discover – doesn’t hold up all that well when I consider that even after 20 hours, I’m still discovering fresh tile interactions that I can experiment with on future runs.

While it feels more passive than RPG games that place me directly in the hero’s dusty shoes, Loop Hero keeps me involved by pressuring me to plan ahead – I’m less concerned with the next fight than with what’s going on further down the track, and beyond that, what the path will even look like the next time around.