Magic: The Gathering has spawned plenty of curious videogame spin-offs over the years, including RTS games, arcade fighting games, and turn-based tactics games. Magic: Legends is the latest effort to marry Wizards of the Coast’s trading card game with another popular genre, the action-RPG. That means top-down action, churning hotbar abilities as soon as they become available, and enemies that erupt with shiny loot upon death.

After a brief hands-on session with Magic: Legends, I can confidently say that it does all of those things, and pretty well. Smashing through nests of sporecap spiders as a flail-wielding necromancer – buffs, debuffs, and summoned creatures raining down onto the battlefield as I cycle through my abilities – is instantly gratifying. Developer Cryptic Studios has packed plenty of punch and brio into every spell – even a basic move like Earth Spike feels powerful as it sends a column of jagged rocks rolling across the arena, hurling enemies into the air.

Spells are the main focus of combat and it’s here where MTG’s card game mechanics really come into play. Abilities are selected in the same way that you would build a deck of cards. Spells belong to one of Magic’s five famous colour types – these broadly denote the type of ability it is, and you can make decks that are either mono-coloured or that mix two colours. Naturally, a Magic: Legends build is made up of far fewer spells than a deck in Magic: The Gathering – 12 rather than 60 – but there’s still an element of RNG as there are only ever four spells available to you while fighting. This is Legends’ equivalent of your hand, as every time you use a spell from your hand of four, you’ll draw a new one from your deck to replace it.

The upshot of this system is that you have to think a bit more before casting a spell. In games like Diablo I tend to either spam my favourite abilities until the room is clear of enemies, or learn a sequence of abilities that complement each other and repeat it to deal damage more effectively. Because I can’t be certain which abilities will fill my hand in Magic: Legends, I spend a lot of time glancing back at my spells to check I’m not about to waste mana buffing a beast that I haven’t summoned yet. 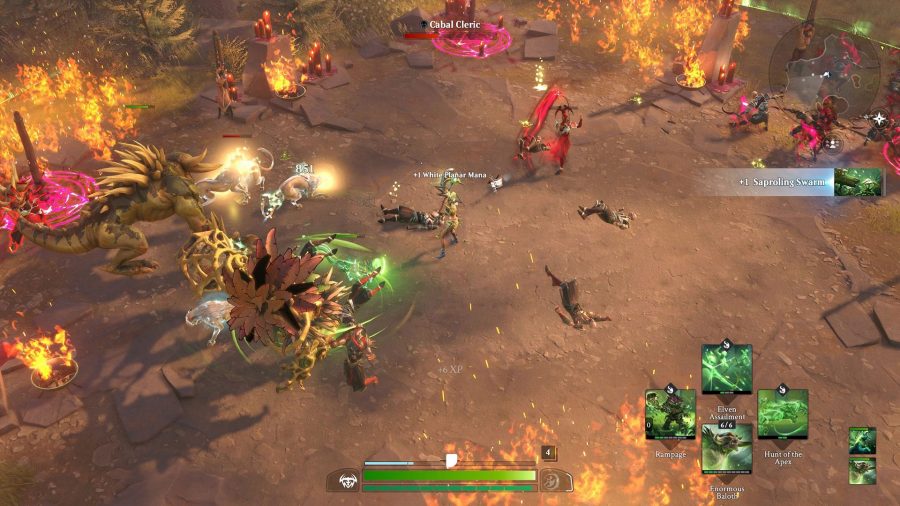 When the spells align and I’m able to spot the pattern this is pretty satisfying, but as a new player with barely any knowledge of the spells that make up my deck, this carousel-like system often leaves me either frozen with indecision or senselessly mashing keys. Cryptic Studios has made this a little easier with distinct casting animations and card art, and by the time the demo ends, I’m able to recognise the majority of the spells in my deck quickly enough to play with more confidence.

It’s worth noting that I’m also playing through the game with a lot of spells and gear already unlocked and equipped. Magic: Legends is a free-to-play ARPG, so naturally there are plenty of ways to spend real-world cash on the game. Looking through the prototype in-game store, there are battle passes, booster packs, instant class unlocks, cosmetic unlocks, and conveniences like renaming your character or additional deck slots up for sale. It’s still far too early to say how much you’ll feel the presence of the store while playing, but it’s a little off-putting seeing how many parts of the game are already being monetised.

There’s still no firm release date for Magic: Legends, but the open beta is set to launch on March 23 on PC.