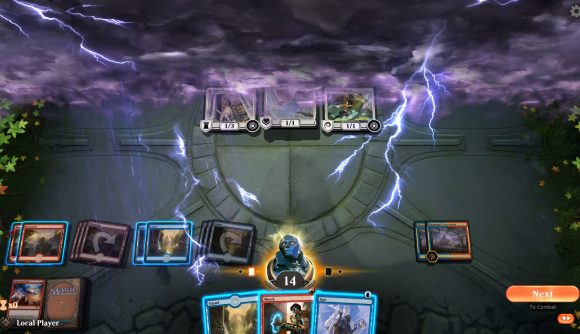 As our sister site The Loadout reports, registration is now closed for the several European countries that FACEIT is handling. The first qualifier round is being held today, and players in England, France, Germany, Italy, and four of the Nordic countries each have their own qualifying rounds.
The league will use the standard format, with matches held each Sunday for five weeks. Each victory is worth three points, and the eight players with the most points at the end of the five-week regular season will advance to a final. That will then be streamed live via FACEIT’s Twitch channel.

The league will also be using the latest digital iteration of the game, Magic: The Gathering Arena, which we reviewed last month and found to be a rather good version of the game, if not quite a replacement for playing with physical cards.

Again, registration is now closed, but you can visit the appropriate FACEIT site, linked in the tweets below, to follow along as the league progresses.

The first Qualifier takes place on the 10th of November. Sign up now 🙌 #BreakTheField

Magic: The Gathering has been around for 26 years now, which means it’s already proven it has the staying power an esport needs. What remains to be seen is whether there’s sufficient interest to sustain a European scene.

But if Magic isn’t your thing, you can always check out our list of the best card games on PC, which provides plenty of alternatives to try.