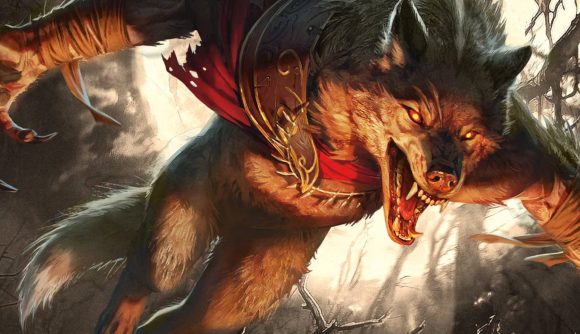 Innistrad: Midnight Hunt is the next expansion coming to Magic: The Gathering, with the popular card game venturing back to the Innistrad plane once more. After the death of Avacyn – the protector of the realm – the humans resort to older, darker magic to ward off the monsters that are now emerging from the shadows. They turn to festivals and rituals to stave off the terrors of the night, most notably the werewolves who’ve grown even more fearsome in recent times. Now, we’ve got a peek at a key card from the newest set: Festival Crasher.

Since we’re back in Innistrad, Midnight Hunt sees the return of transforming double-faced cards, perfect for tackling the werewolves that roam in the darkness. Flashback is also back. This is a keyword ability on instants and sorcery spells that can be cast once more if you pay the flashback cost from the graveyard, but in this set, it’s found on multicoloured cards.

Flashback is a key component that ties into the new Festival Crasher card, revealed below. As you can see, it’s a common red devil creature with a power of one and toughness of three that costs one red mana and one colourless mana to cast. Festival Crasher’s triggered ability increases the devil’s attack by two per instant or sorcery cast until the end of the turn.

You can take a look at Festival Crasher below: 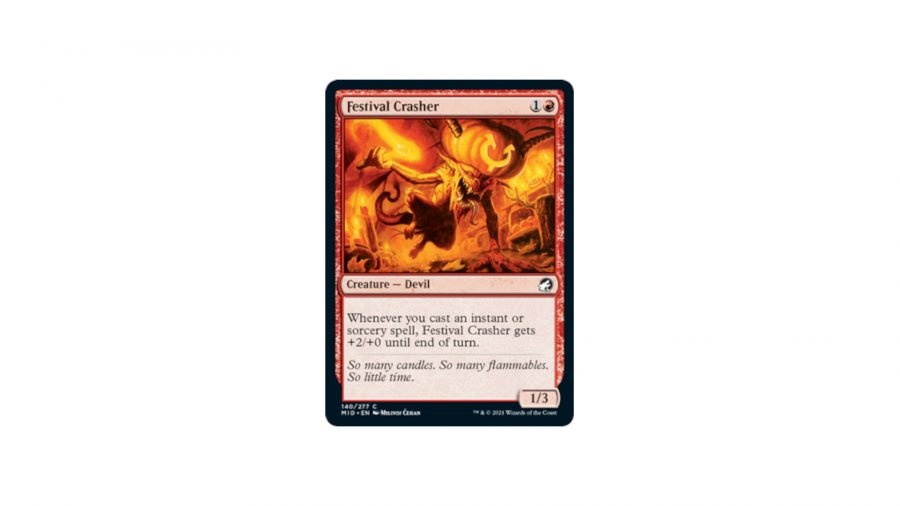 Festival Crasher’s ability isn’t totally new, with similar effects having appeared on creatures such as Fire Urchin from Guilds of Ravnica or Kiln Fiend from Rise of the Eldrazi in the past. Veterans of the game will remember Guildpact’s Wee Dragonauts, which does cost one blue mana more to cast. However, it does also have flying as a vital bit of evasion – something that Festival Crasher lacks.

Because of this, it’s unlikely that Festival Crasher will see any play in constructed decks. However, there’s potential for this devil to see play in drafts. Its cheap mana cost makes it particularly potent in aggro burn decks that fling spells to keep the devil’s attacking power high. Cheap spells like Consider, Play with Fire, and Infernal Grasp pair well with Festival Crasher, but it’s the instants and sorceries cast using the flashback ability that makes the devil’s triggered ability slightly more reliable. Festival Crasher also has a toughness of three, so you can’t easily remove it with a single burn spell.

New to Magic: Learn how to build a Magic: The Gathering deck

This card possibly won’t offer a win condition to build an entire deck around, but it’s a potentially vital part of a much larger aggro strategy with plenty of spells and similarly speedy creatures to win games quickly.

If you’re keen to check out more Innistrad: Midnight Hunt card reveals, our sister sites The Loadout and Wargamer have a few more new cards to show you. The new set is coming to Magic: The Gathering Arena on September 16, and to retail stores on September 24. If you’re just starting to play MTG, check out our guides on how to play MTG: Arena, as well as all the current MTG keyword abilities, such as trample and hexproof.